Chelsea vs Leicester – Preview, and Predictions

Chelsea vs Leicester – Chelsea had come so far this season just to lose their third-place finish.  After being ousted from the Champions League, which they had won the previous season, fans are already disappointed.

On top of that, they had to lose to Liverpool in both the EFL Cup and FA Cup finals, both on penalties. After such a difficult campaign, a podium place is the very least Thomas Tuchel can offer the fans.

They are at home on Thursday, and the club will give it everything they have to finish the season ahead of Tottenham and Arsenal.

Former champions Leicester, on the other hand, are out to prove a point. They had a dismal season this time around, failing to even qualify for the Europa Conference League.

They have, however, managed to somewhat improve their record in the last months of the season, and they will be determined not to let this momentum slip now.

What better way to make atonement than to defeat the previous European champions, especially at their own ground? As things stand, either club is anticipated to score at least once on Thursday.

Three or more goals were scored in the last two games, and the Blues have won their last two games. The hosts haven’t preserved a clean sheet at this venue in four years.

The most recent match at this venue ended in a 2-1 victory for the hosts. The Blues won 0-3 on the road against Leeds on the last day of the season, but they were then defeated in the FA Cup Final by Liverpool.

As such, They’ll be determined to give their supporters some closure, and we can expect them to come out firing.  given their overall form throughout the season, as well as the Foxes’ troubles this season, Tuchel’s men have a good chance of putting three points on the board.

The Foxes, on the other hand, had just won 1-5 on the road at Watford the previous game week, and had scored eight goals in their previous two games.

They’re also determined to keep this scoring streak going, especially since the Blues’ defense has been suffering recently. 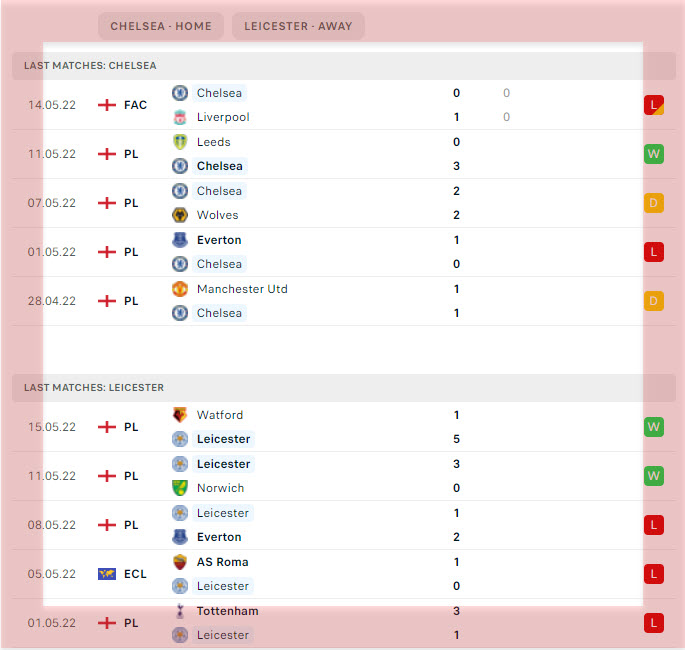