Charlotte FC is currently ranked 9th in the Eastern Conference, with 13 points from 12 games. They won four times in the league, drew once, and lost seven times. They haven’t been very steady recently, winning, drawing, and losing games in a haphazard fashion.

The hosts will be aiming for a better result after losing 0-2 to the Montreal Impact in their previous MLS match. Miguel Angel Ramirez’s team has scored 9 goals in their last six games, giving them an average of 1.5 goals per match.

The Vancouver Whitecaps, on the other hand, are at the bottom of the Western Conference, finishing in 14th place with just 11 points. They only won three of the eleven games they played, drawing two and losing six.

The Caps had a slow start to the season, but have recently shown signs of improvement. The Vancouver Whitecaps are coming off a 2-1 league victory over FC Dallas in their most recent match.

They are undefeated in the league after three games, however they have conceded 21 goals due to defensive blunders. These two teams have never met before in any competition, and this will be their first meeting.

Charlotte has struggled in front of goal recently, with the team failing to score in three of their last five games. They lost their four-game winning run at home to Montreal in the previous schedule.

However, in terms of home performance, they are third in the league. Meanwhile, the Vancouver Whitecaps have been on a roll, having gone four games without losing in various tournaments.

They are miles behind in terms of away performance, having lost all five of their road games this season. We expect the hosts to win this Sunday since the visitors are terrible on the road and the hosts are better at home. 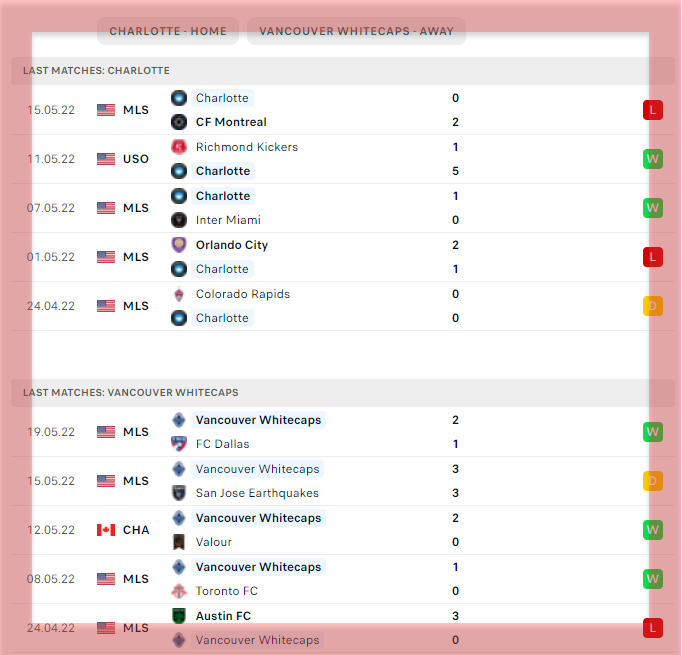