CFR Cluj vs Ballkani – CFR Cluj missed their first match-point seven days ago when they fell 3-0 at Sivasspor. They have the second (and the last one) this Thursday against group underdogs Ballkani at their Stadionul Dr. Constantin Radulescu.

CFR Cluj need a win to secure the knockout phase of the competition having beaten Slavia Prague twice in a double-header in the third and the fourth round respectively.

Interestingly, these were the only two wins for CFR Cluj in Group G. Nevertheless, they will have a huge opportunity to record the third on the home patch against Ballkani.

The visitors have already made a huge achievement by joining the group stage of a European competition.They don’t have a chance to advance after back-to-back home defeats to Sivasspor and Slavia Prague.

However, the team led by Albanian manager Ilir Daja did shock Sivasspor 3-4 in the previous game on the road in this group.

The visitors have nothing to lose here and they will play without a pressure at all. Knowing they have scored six goals in two away outings in the UEFA Europa Conference League, we would not be shocked to see them on target in Romania as well.

The visitors’ chances of scoring grow if we know that CFR Cluj have conceded at least a goal in five subsequent games in all competitions.The Romanians allowed five goals in the previous two defeats to Sivasspor and Rapid Bucharest.

Ballkani held CFR Cluj to a 1-1 stalemate in the reverse fixture played almost two months ago in Kosovo. This will only be the second head to head outing between Ballkani and CFR Cluj.

CFR Cluj will hardly waste this opportunity. They need to beat the opposition from Kosovo on the home patch to advance to the knockout phase of the European competition.

However, since Ballkani have notched six goals in two away matches in this group, we like the 3.00 odds offered for CFR Cluj to win & Both Teams To Score pick. You can also take the 11.00 odds for the 3-1 correct score pick. 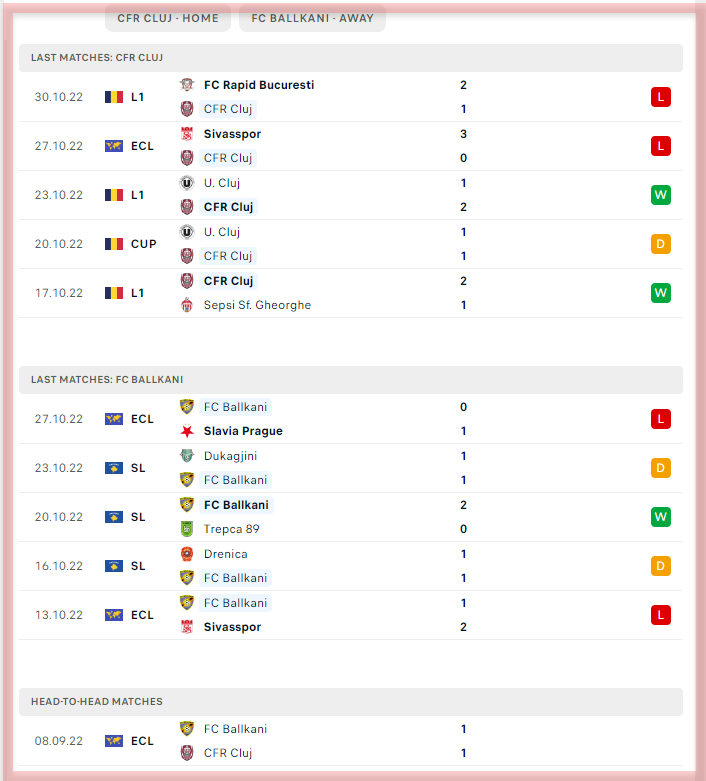