Celtic vs Rangers – Preview and Prediction

Celtic vs Rangers – On Saturday, at approximately thirty minutes past noon, the first Old Firm derby of the season will take place, featuring Celtic taking on Rangers. A huge excitement is expected in and around Celtic Park because of this matchup.

Last weekend, both sides collaborated to rout their respective rivals and score 13 goals in the process, which served as a fantastic pregame announcement of the upcoming derby.

The Bhoys have been performing at a higher level, as evidenced by their celebration of a resounding victory away to Dundee United by a score of 0-9. Last weekend, the team led by Ange Postecoglou displayed a brutal attitude toward their opponents.

At Tannadice Park, Kyogo Furuhashi displayed an excellent run of form by scoring three goals in the first half an hour of play, giving him a hat trick early in the match.

Celtic are the only team in the league to have a perfect record, having won all five of their matches thus far. They are off to a fantastic start to the season, boasting a goal differential of 21-1.

Nevertheless, these routs of low-profile teams won’t mean much when they face their fiercest city rivals, Rangers, in the Old Firm derby. Rangers are known for their biting defence.

The Gers are close on their heels with four victories and a tie after the first five rounds of competition. They made a mistake just two weeks ago, when they played Hibernian on the road and ended up drawing 2-2 and giving up an equaliser in stoppage time. This happened in Edinburgh.

This will be the seventh time in 2022 that these two teams will compete against one another head to head. In the league matches, Celtic earned two victories and a draw, whilst Rangers prevailed in the FA Cup semifinal by a score of 2-1 after extra time and celebrated their victory.

In each of the three most recent head-to-head matchups, both teams managed to find the back of the net. When two prolific goal-scorers like Kyogo Furuhashi and Antonio Colak are both on the field at the same moment, it is quite difficult to anticipate anything other than goals being scored at both ends of the field.

In light of the fact that both teams have scored in each of the three previous head-to-head matchups between the Old Firm rivals, you should feel confident backing the Both Teams to Score choice at odds of 1.66.

Both sides have had strong starts to the new season, thus the outcome of this match is extremely up in the air. It might go any way. The value lies with the visitors, who have odds of 1.83 to win their match and leave Celtic Park undefeated.

It is imperative that we should not forget that Rangers demonstrated their strength by advancing past teams such as PSV Eindhoven in the playoffs of the UEFA Champions League this past summer.

Celtic vs Rangers – Head -to- Head 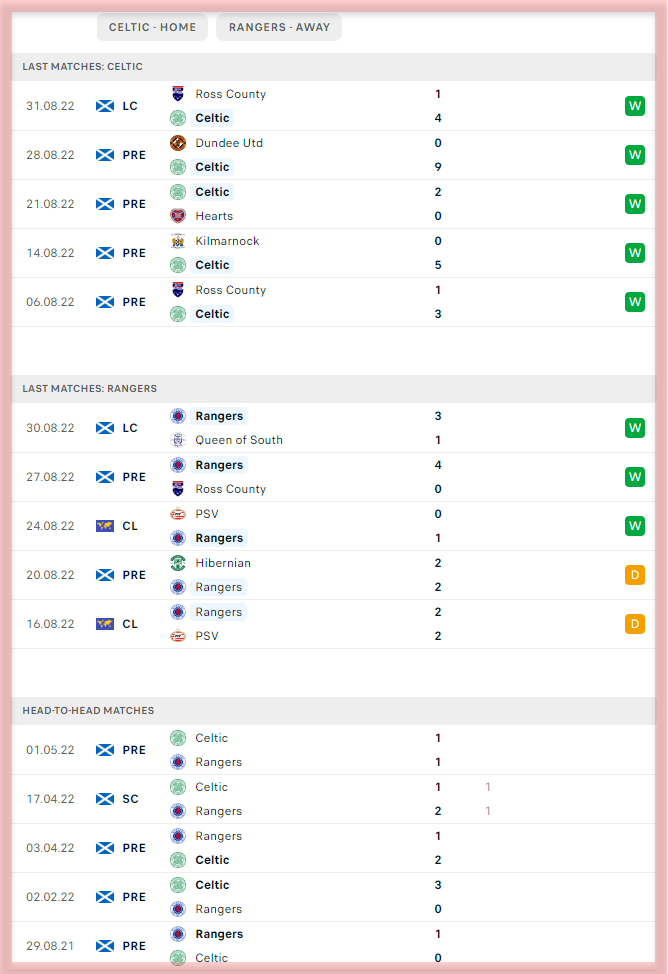