Celta Vigo vs Osasuna-Osasuna are in pursuit of a spot in the top-six of the table, and as of now they need a surplus of just one point to climb level with the sixth-placed team. Meanwhile, Vigo are hanging by a thread over the relegation cut-off.

Based on their recent form, it would not be wrong to call them the worst team in the whole of the Spanish top flight at the moment. Not only are they totally winless in the past five games in the league, but they also lost four of these fixtures.

So far they were able to register just three wins in the entire tournament, and only the dead-last placed team has let in more goals than them in the current edition of the La Liga.

Meanwhile, Osasuna faced defeat just four times in the competition, and three of these losses came against titans like Valencia, Villarreal, and Betis.

They are also on a rather impressive run on the road. They lost just once away from home since August, and this only defeat came against Villarreal, As things stand, expect a win for Osasuna this weekend at the Estadio de Balaidos.

The latest encounter ended in a 2-0 win for Celta Vigo, Three of the past six meetings had goals from both teams, Two of the past four match-ups at this venue had three or more goals, It’s been 16 years since the guests kept a clean sheet at this stadium.

Since the first week of October, Vigo are on a winless run. In fact, barring a single draw, it becomes a 100% losing record.

It’s been more than a month since they kept a clean sheet at home, and they even conceded eight goals in their past three games combined.

On the other hand, Osasuna are in much better form. Their latest fixture ended in a 2-0 win against Valladolid, and it is also to be noted that they consistently scored goals in road fixtures all through the current campaign.

Celta Vigo vs Osasuna – To Head 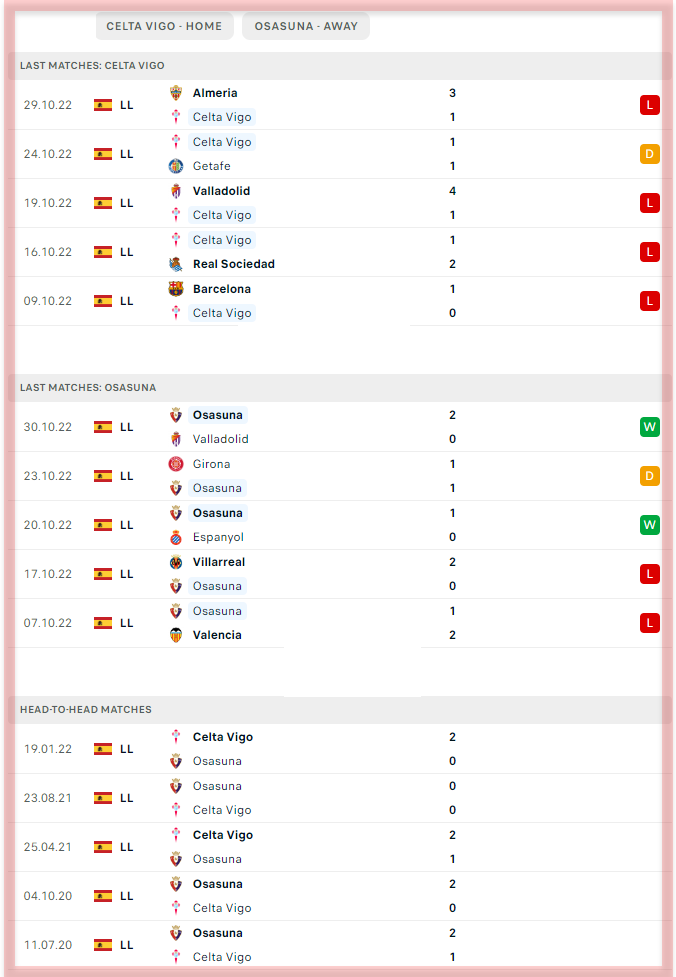