Celta Vigo vs. Elche – When Celta Vigo hosts a struggling Elche team on Friday night, they will be searching for their first La Liga victory since the end of December.

The hosts, who are now in 10th place in the table, are coming off a 2-2 draw with Atletico Madrid on Monday, while Elche earned a valuable point against Villarreal at home last time out.

Eduardo Coudet has only been in command of Celta since November 12th, but the 46-year-old has already had an impact, winning six, drawing four, and losing five of his 15 games in charge.

When the new head coach was appointed, the Sky Blues were towards the bottom of the table, but they are now in 10th place, just four points behind seventh-placed Real Betis.

Celta haven’t won in the league since the end of December, but they’ve drawn their previous three games, including a 2-2 tie with Atletico Madrid on Monday night, in which Facundo Ferreyra scored in the dying minutes to guarantee the points were shared.

Los Celestes had finished 17th in their last two seasons at this level, but they will be aiming higher in 2020-21; however, they have only won one of their last five La Liga games against Elche, and the points were shared in a 1-1 tie when the two teams met in November for the rematch.

Elche, like Celta, comes into this match on the back of a strong win, having held a powerful Villarreal side to a 2-2 draw on Saturday; the Yellow Submarine led 2-0 at halftime, but Guido Carrillo and Lucas Boye scored in the second half to level the score.

Los Franjiverdes have only won three of their 20 league games this season, leaving them in 19th place in the table, two points behind Eibar in 17th place with two games remaining.

Elche, who face Eibar in their next encounter, has two games in hand on the teams around them, but they haven’t won in Spain’s top division since October 23.

However, Jorge Almiron’s team still has time to avoid trouble, since two of their three league victories have come on the road, with wins over Alaves and Eibar in the early stages of the season. 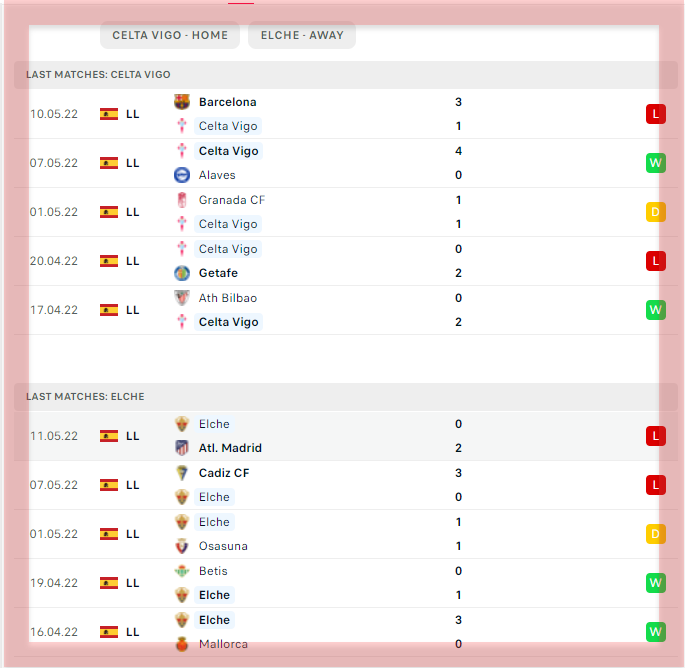