In the fourth round of the FA Cup, Steve Morrison’s side had a difficult trip to Anfield on Sunday, and despite youngster Rubin Colwill scoring in front of the travelling fans, Liverpool advanced with a 3-1 victory.

Cardiff will be seeking to build on last week’s 1-0 triumph over Barnsley, which gave the Bluebirds some breathing room above the relegation zone thanks to Uche Ikpeazu’s 71st-minute strike.

Morrison must assist his team in improving their home record at the Cardiff City Stadium, where they have won just three occasions out of a potential 39 points.

Darren Ferguson’s side has only scored eight goals on the road this season, conceding 38 goals and winning just once.

That does not bode well for the Posh ahead of this week’s match, but they will be seeking to build on their FA Cup victory against Queens Park Rangers last weekend.

Joe Ward and Ricky Jade-Jones scored to advance Peterborough to the next round, and they were the home team’s only two shots on goal on the day.

Sean Morrison, the 31-year-old Cardiff centre-back, was forced off after just 10 minutes against Barnsley, and the 31-year-old is anticipated to miss the rest of the season due to a long-term injury.

Morrison made eight changes to his side on Sunday, but the Bluebirds are anticipated to choose a team identical to the one that defeated Barnsley last week, with Max Watters and Jordan Hugill leading the line.

Due to a ligament injury, Dan Butler has not played for Peterborough since the beginning of December and will miss the remainder of the season.

Posh will also have a defensive three consisting of Frankie Kent, Nathan Thompson, and Josh Knight, with Swansea loanee Steven Benda operating between the sticks behind them. 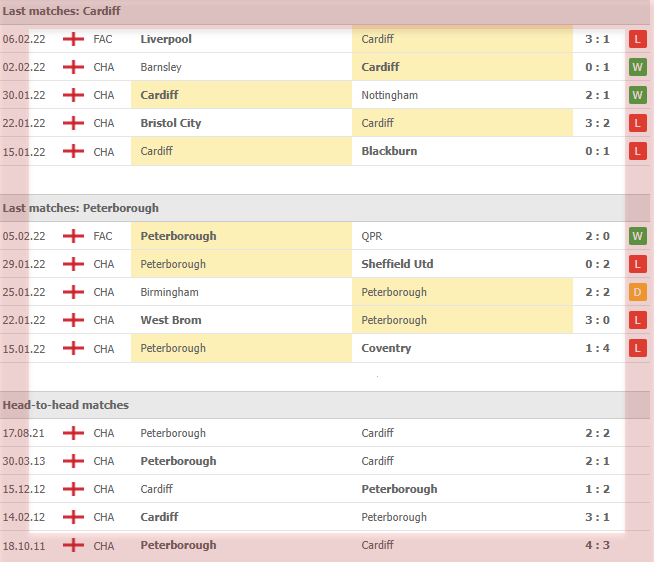 Given Peterborough’s goal-scoring record away from home, they are unlikely to find the net this week in what may be a low-scoring encounter.

After two consecutive Championship victories, Cardiff will be optimistic that three points will put them in a solid position to climb away from the relegation-threatened bunch.