Cambridge vs Cheltenham – Preview and Prediction

Cambridge vs Cheltenham – This season, Cambridge’s performance has been inconsistent. The squad may go undefeated for a few games before their form abruptly deteriorates, resulting in a cold streak. The squad has no chance of qualifying for the playoffs with only one encounter remaining in League One. They are now 14th in the league standings with 57 points.  Cambridge’s most recent encounter was against Sunderland, in which Sunderland scored five goals to Cambridge’s one. With a 5-1 FT result, Cambridge was defeated in the encounter.

Cheltenham’s recent matches have yielded varied outcomes. They, too, have no hope of making the playoffs with only one match remaining. The squad will also compete in League One next season. With 55 points from six matches, they are presently ranked 15th in the league. Cheltenham Town’s most recent game was against Bolton Wanderers. In the encounter, Bolton scored two goals while Cheltenham only managed one. The game finished with a 1-2 FT result.

This season, Cambridge and Cheltenham have been inconsistent in their performances. Both teams have no chance of qualifying for the Championship next season.

Based on previous results, we can predict that Cambridge will win the match. Despite the fact that the club has not had the best recent results at home, they still have the benefit of playing at home. In their most recent matchups, both teams have scored. As a result, we can expect the game to end with more than 2.5 goals. 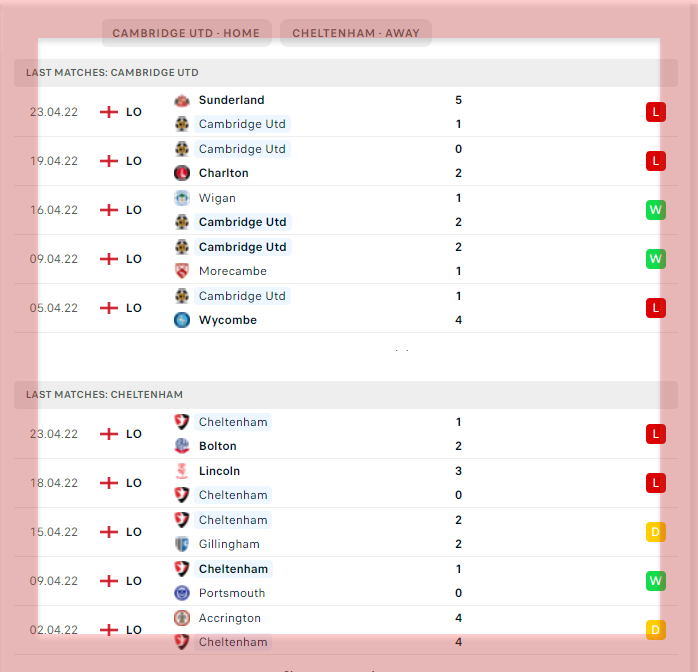