Cagliari vs Inter Milan – Cagliari were only saved from further relegation by a 99th-minute equaliser against 17th-placed Salernitana last Sunday, but coach Alessandro Agostini praised his players, saying they “reacted like men” when they went behind. Cagliari will almost certainly need to avoid defeat against the reigning champions here in order to stay alive ahead of a favourable trip to bottom club Venezia on the last day of the season.

Few would be surprised if, in the event of another false start, they fail to battle back, having only taken one point from their last three Serie A (SA) home games against other confirmed top-four opponents. The most recent of these (L 1-2 vs Juventus) came despite them scoring first, adding to their terrible home league record as underdogs (W1, D3, L6).

Inter Milan won their sixth Coppa Italia in midweek action, but that will be rendered worthless if they fail to win here. With Inter trailing rivals AC Milan by two points at the start of the new week, only absolute perfection will be enough for Inter to have any hope of defending their title for the first time in 12 years.

Despite the possibility of being exhausted from extra time in the cup final, Inter should win comfortably. The ‘Nerazzurri’ have only lost once in their last 13 SA away games (W7, D5), and conceding first may not be as bad as it seems, with Inter recovering an average of 2.20 points after conceding first in SA road trips!

Cagliari’s lifeline came last weekend in the form of defender Giorgio Altare, who scored his first SA goal in the process. While Ivan Perii is the man of the moment with his extra-time cup final brace, Lautaro Martnez, who scored twice in the reverse H2H, will be a threat for Altare ,Inter have scored exactly twice in one half in four of their last five away victories in South Africa. 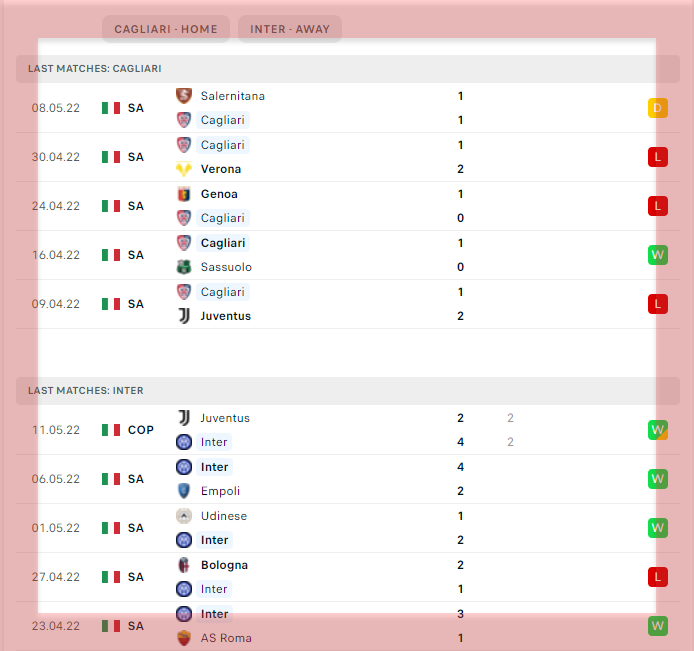