Cadiz vs Real Madrid – Real Madrid will try to get back on track for the La Liga title when they go to play at Cadiz on Wednesday night.

Both teams’ most recent games ended in 0-0 draws. Cadiz and Celta Vigo cancelled each other out, and Los Blancos couldn’t find a way to beat Getafe.

Before Celta Vigo came to town, Cadiz had won back-to-back games in La Liga for the first time this season. They could have been forgiven for being optimistic about their chances of getting nine points from their last three games.

But Alvaro Cervera’s team couldn’t follow up their wins against Valencia and Getafe by beating another mid-table team on the weekend. They had to settle for a 0-0 draw, but that point could go a long way toward giving the newly promoted team another chance to play in the big league.

Cadiz is currently in 13th place and has seven games left to play. They are nine points ahead of the relegation zone, so if they keep playing like this for the rest of the season, they will be safe in the top division for the 2021-22 season.

After a bad stretch from January to March, Cervera’s team has only lost one of their last six La Liga games. Given how close the teams are in the standings, it’s not impossible for Cadiz to finish in the top half of the league.

The hosts have also won their last three home games and only given up one goal in that time. Even though things look good for Cervera and the rest of his team, it would be surprising if Real Madrid didn’t bring them back down to earth in midweek.

Zinedine Zidane hasn’t given up hope that Los Blancos can keep their title, even though they missed the chance to close the gap to Atletico Madrid to just one point. The depleted champions could have easily lost on another day, and they aren’t guaranteed an easy three points at newly promoted Cadiz.

Real Madrid has now gone 15 games without losing in all competitions, which is good news. However, their Champions League semi-final against Chelsea could end this impressive streak, and if they beat Atletico Madrid on Wednesday, they would temporarily tie them in points.

Real Madrid also goes to Estadio Ramon de Carranza with the best away record in the top flight. Only one of their 16 league games played away from home has ended in a loss, and no team has been able to beat Zidane’s defense more than once during their 11-game unbeaten run away from home.

But Los Blancos will still have nightmares about their last game against Cadiz, when a goal by Antony Lozano gave the newly promoted team a 1-0 win. If Los Blancos lose again to Cervera’s team, it could be disastrous for Zidane’s struggling team in the battle for Spanish supremacy. 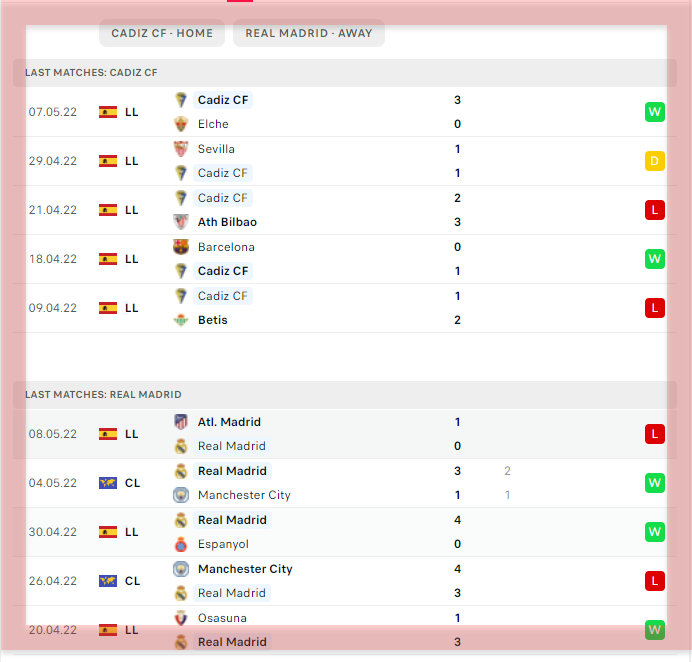