Cadiz CF vs Mallorca – Following a 1-0 La Liga defeat to Sevilla in their previous game, Cádiz will be hoping for a better outcome in this one.

Cádiz had 25% of the possession in that game, and 1 of their 4 shots on goal was successful. Nine of Sevilla’s 17 shots on goal were on target. Sevilla scored in the 89th minute through Ivan Rakiti.

Recent years have seen far too few instances of Cádiz refusing to yield. They will be concerned that Cádiz have allowed 8 goals in their last 6 games while failing to prevent opponents from scoring in 5 of those contests. In this game, we’ll find out if that pattern will hold.

Mallorca’s last La Liga match was against Celta Vigo, which they won 1-0.

Mallorca had 42% of the game’s possession and eight shots, only one of which was on goal. Dani Rodriguez was the lone scorer for Mallorca (59′). Three of Celta Vigo’s ten shots on goal were on target.

There have been remarkably few goals scored between Mallorca and the opposition in six of the last six games that Mallorca has played.

The overall average of goals scored over that time span was a pitiful 1.33, with Los Bermellones scoring an average of 0.67.

Reviewing their previous meetings, which date back to August 28, 2016, reveals that Cádiz has won 0 and Mallorca has won 2, with a total of 4 games ending in draws.

In total, 10 goals were scored in those matches between the two teams, with 4 coming from Submarino Amarillo and 6 from Los Bermellones. This results in an average of 1.67 goals scored per game.

Cádiz had 12 attempts at goal, with 5 of those being successful. Rubén Alcaraz scored after eight seconds. Carlos Del Cerro Grande served as the referee.

We believe that this match between Mallorca and Cádiz should be a close one.

Looking at what the bookmakers’ view is of this game in the 90 minute result market, backing Cádiz is available for 2.86, backing the draw is 2.88, and putting your money on the winner to be Mallorca comes in at 2.92. Those are the top bets offered at the current time. 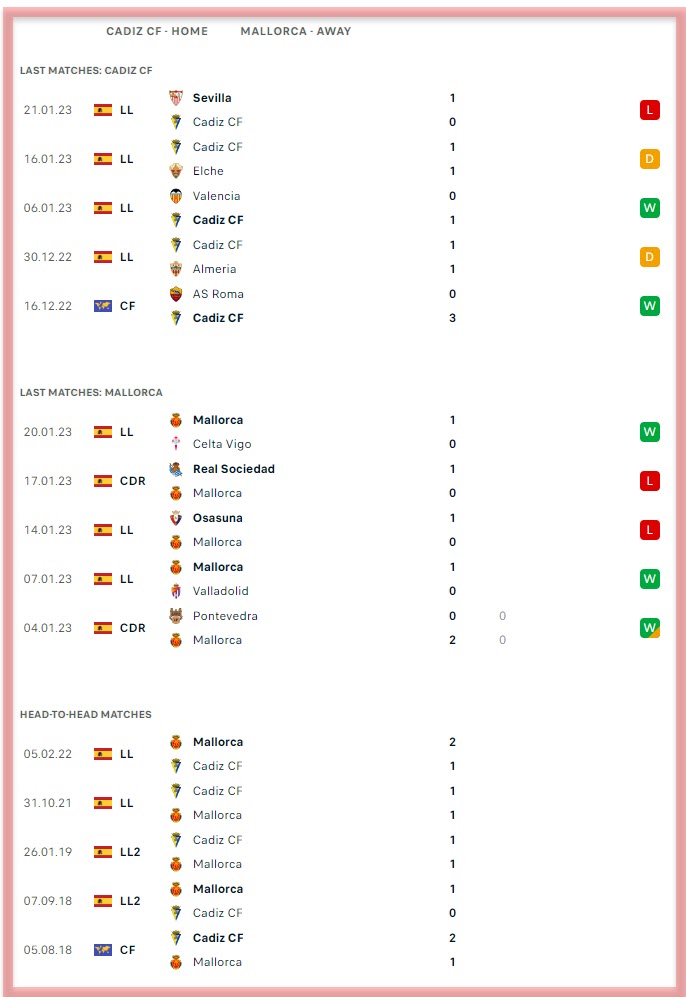