Burnley vs Newcastle -Preview, and Prediction

Burnley vs Newcastle – Burnley is still in the relegation zone, and with this being their final game of the season, they will have to perform at a high level to escape being relegated to the Championship.

They have battled for form throughout the season and have conceded a large number of goals as a result. It’s also worth noting that they haven’t performed well under pressure at any time during the campaign.

With the team desperate for three points on Sunday, there’s a good chance they’ll make a lot of mistakes, which the opposition will try to exploit.

The troubles will only get worse when they face an in-form Newcastle side that is looking to make a splash in the new season. The Magpies have been on another level since January.

They are determined to become one of the best teams in the English Premier League. It is critical that they end their campaign on a positive note. It’s also worth noting that they have a favorable head-to-head record against this opponent in previous seasons.

Expect a win for Newcastle this Saturday, as well as plenty of goals, given Burnley’s desperate state.

Burnley was defeated 1-0 by Tottenham on the road last weekend. They’ve also lost their last two games, allowing a total of four goals in the process.
Newcastle, on the other hand, defeated Arsenal 2-0 at home last week, virtually ending the Gunners’ chances of finishing in the top four.

Furthermore, the Magpies had won five of their previous seven games, and they had a great record versus this opponent in previous years.

Burnley vs Newcastle -Head To Head 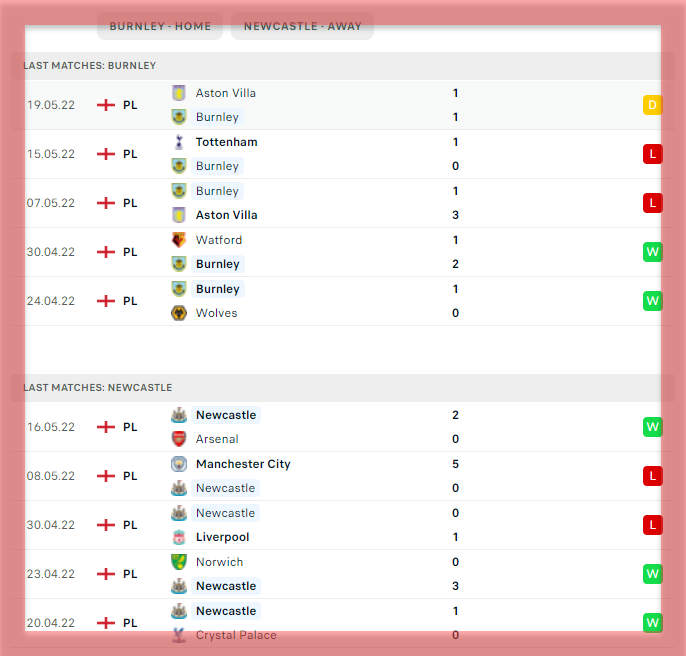