Bulgaria vs Gibraltar – Preview, and Prediction

Bulgaria vs Gibraltar -Mladen Krstajic, a former player for Schalke 04 and manager of the Serbian national team, will make his debut for Bulgaria this Friday against Gibraltar.

In the group containing Georgia, North Macedonia, and Gibraltar, the Bulgarians have been among the worst letdowns of the whole UEFA Nations League season, going four games without a single victory.

In a 1-1 tie with them three months ago, they allowed the tiny nation of Gibraltar to earn their first point and score their only goal of the competition. With Krstajic in charge going into the forthcoming EURO qualifiers, the Bulgarians are trying to turn a fresh leaf after the team’s disappointing result in Gibraltar.

In order to give debuting caps to players like Ilia Gruev, Ivan Yordanov, Yoni Stoyanov, Nikola Iliev, Marin Petkov, and Georgi Rusev, among others, Krstajic made some intriguing call-ups. Therefore, we anticipate a great showing from the Bulgarians, who will be extremely driven to demonstrate their readiness to wear the national jersey under the new boss.

Given that all Gibraltarian players, with the exception of one, are paid through the domestic league, the disparity in quality should not be questioned (an amateur competition). In their last 21 games across all leagues, Gibraltar has gone winless. In their past ten games, including friendlies, they have only managed to score twice.

Their most recent game was a difficult 4-0 away loss to North Macedonia in the middle of June. Last but not least, in each of its previous five away games, the club managed by Uruguayan manager Julio Cesar Ribas allowed at least four goals.

In order to impress the new head coach, the Bulgarians will be very motivated on Friday. We’ll choose the home team to win by at least three goals at the odds of 1.85, while more daring bettors can wager on the hosts to receive a -2 handicap in the first half at the odds of 5.50.

Bulgaria vs Gibraltar – Head To Head 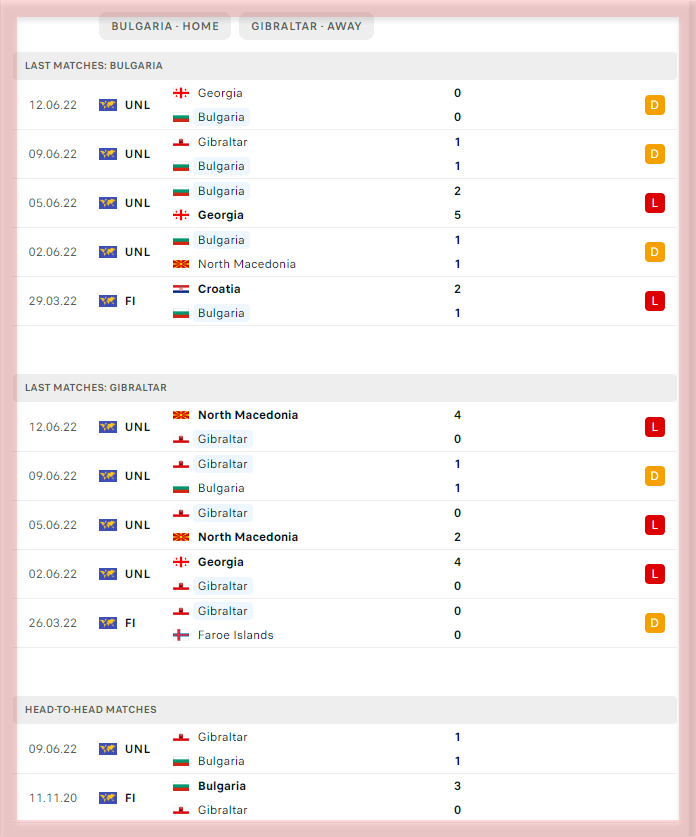