BSC Young Boys vs Grasshopper- The Swiss Super League’s last round begins this Sunday, with former champions Young Boys hosting the mid-table Grasshoppers. At Stadion Wankdorf, these two teams will square off. With 57 points from 35 games, Young Boys are in third place in the standings. They won 15 games in the league, drew 12 times, and lost eight times. The hosts have had the finest attacking front this season, scoring 77 goals, while defence has been a major issue all season.

The hosts are coming off a 1-1 draw against Luzern in the Super League. Young Boys have already been promoted to the Europa Conference League qualifying round, therefore this match will have no bearing on their chances. Grasshoppers, on the other hand, are in seventh place on the standings with 40 points. They won 9 out of 35 games, while drawing and losing 13 times each. The visitors have seen a lot of goals, but they also concede a lot of them, indicating that some defensive improvements are needed.

Following their 3-2 league triumph over St. Gallen, the Grasshoppers will be looking for a repeat performance. They have nothing to play for at this moment, having avoided the relegation zone, and will now try to finish the season on a good note.

Young Boys has recently relished playing at home, going undefeated in three games, two of which were back-to-back victories. We could see several goals in this one, since three or more goals have been scored in the last ten games featuring them. Meanwhile, the Grasshoppers have drawn three of their past four league road games. They haven’t beaten this opponent in the last 11 head-to-head meetings. Given their previous head-to-head records and current form, we believe a home win or draw is a viable possibility. 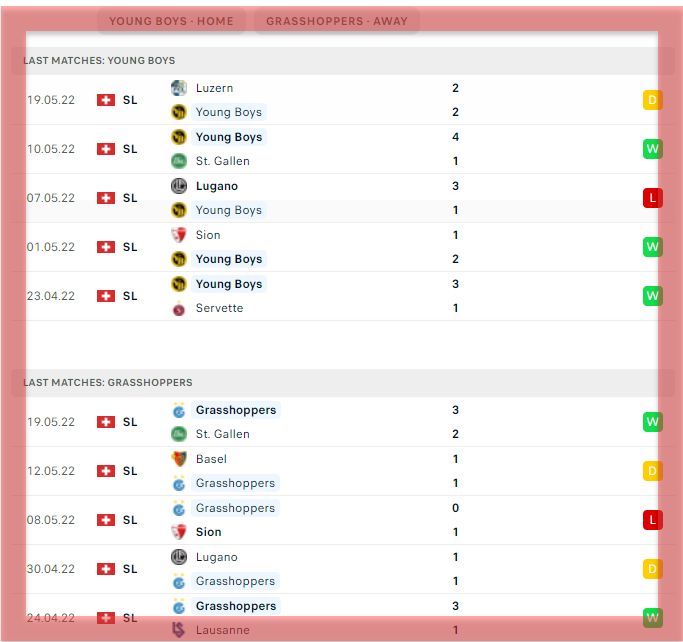