BSC Young Boys vs FC St. Gallen – On Tuesday, Young Boys will host St. Gallen at the Wankdork Stadion in the Swiss Super League. Matteo Vanetta’s Young Boys have battled for form. They lost 3-1 to Lugano last time out, with Mohamed Camara’s second-half opener cancelled out by their clinical opponents. Young Boys have 53 points from 33 games, third in the league. Lugano gained headway on them last week and will try to expand the gap this week.

St. Gallen have had mixed results recently. It was fortunate that they didn’t lose by more since their opponents squandered many chances. The visitors have 47 points from 33 games, fifth in the league. They’ll be hoping to move on from their latest defeat as they push for Europe.

Young Boys and St. Gallen have met 75 times. The hosts have won 42 games while the guests have won 13. Both teams have 20 draws.
The two teams drew 3-3 in their last league meeting.

The defeat stopped Young Boys’ winning streak and made them winless in their last ten league games. They currently have the league’s second-best home record and will aim to capitalise on it this week. St Gallen’s three-game winning streak came to an end on Saturday and they will be aiming to rebound. They are in better shape and should win on Tuesday. 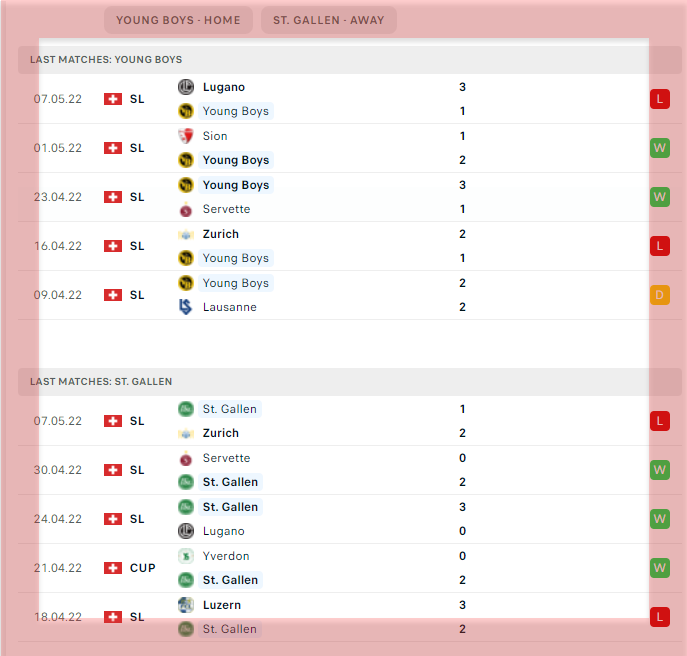