Brondby vs Silkeborg – Preview, and Prediction

Brondby vs Silkeborg – Brondby has been struggling in their matches for quite some time. They had gone nine games without a win until their most recent victory. Due to their cold run, the defending champions have dropped to fifth place on the table with 45 points. They are tied for fourth place with AaB, and a win in their upcoming match will guarantee them a spot in the Conference League playoffs.

Brondby’s last match was against Aalborg. Brondby scored three goals while AaB only managed one, resulting in a 1-3 FT triumph for Brondby.

Silkeborg‘s form dipped after a string of victories, resulting in two consecutive losses in recent encounters. The team has six wins and four losses in its previous ten games. With 49 points, the squad is currently in third place in the league rankings. The team’s current position has earned them a spot in the Europa Conference League.

Silkeborg’s most recent encounter was against Midtjylland, in which Midtjylland scored four goals while Silkeborg only managed one, resulting in a 1-4 FT loss for Silkeborg.

Silkeborg won the last h2h match with a 3-0 FT result. Silkeborg has only won one of the last 10 head-to-head meetings. Brondby has not suffered a defeat at home since 2010.

Even if Silkeborg has lost their previous two matches in a row, the club can bounce back at any time and win. Brondby has only won once in their last ten games, with eight of them scoring under 1.5 goals.

In their last five home games, Brondby has failed to win. In these games, they have also failed to score more than 1.5 goals. Silkeborg has two victories and three losses in their previous five away matches.

Silkeborg appears to be the superior team of the two, with a stronger chance of winning than Brondby. Brondby has scored under 1.5 goals in the majority of their recent games and will most likely do so again in this one. However, with both teams scoring, the game is likely to end with more than 2.5 goals.

Brondby vs Silkeborg – Head To Head 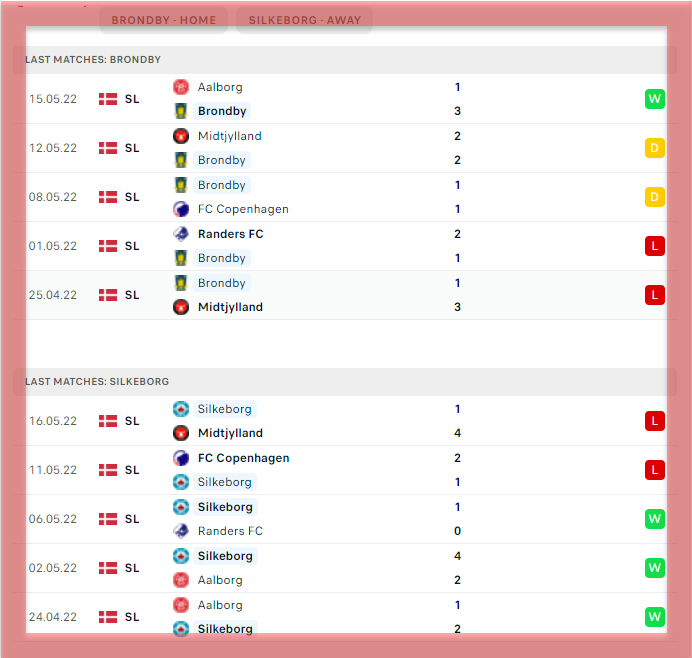