Bristol City‘s inconsistency have been so severe this season that the best they can realistically hope for is to finish in the middle of the table.

However, after losing five of their last eight games and conceding 22 goals, Nigel Pearson understands that failing to win again in the near future will retain the team as a relegation contender.

With a 14-point difference between them and 22nd-placed Peterborough United, that seems impossible, but Pearson will not want complacency among a set of players who have consistently underperformed all season.

The Robins’ most recent defeat came against Blackpool on Saturday, when they were defeated 3-1 at Bloomfield Road after conceding three goals each side of half-time.

Many Reading fans are wondering why Veljko Paunovic, who has overseen a run of nine games without a win in all competitions, has not been given that choice.

The wider picture may dictate that the Royals cannot afford to part ways with the Serbian on a variety of levels, but there will be an acknowledgement that Reading are only avoiding relegation owing to the poor record of the teams below them.

At some point, things will surely change, and Paunovic will hope that a weekend off from activity has given his players the time to replenish their batteries ahead of such a vital encounter.

Joe Williams, who played 45 minutes at the weekend, might return to the heart of Bristol City’s midfield following injury.

With Callum O’Dowda out, Alex Scott is expected to go to right wing-back, while Nahki Wells has put himself in contention for a recall after scoring off the bench against Blackpool.

The likes of George Tanner, Matty James, and Andy King are again expected to miss out through injury.

Ince is expected to take the position of George Puscas, who left Reading on deadline day, with Ovie Ejaria another creative player vying for a spot.

Andy Rinomhota should be back to the center of the pitch as a result of the reshuffle, possibly replacing Danny Drinkwater. 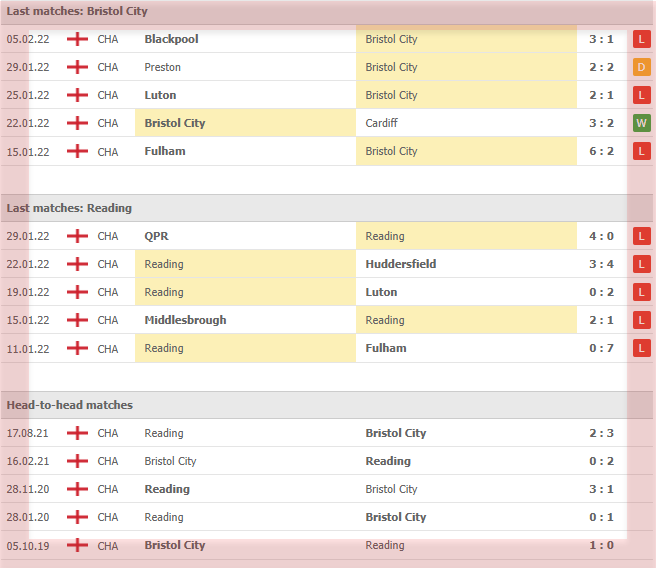 With both clubs dealing with their own problems throughout the season, this match appears to be a tricky one to predict. However, the home side may just have enough to take all three points, especially if the Royals try to close shop for a draw late in the game.