Bristol City vs Coventry – On Tuesday evening, Coventry City will face Bristol City, who are just three points adrift of the Championship play-off places. Meanwhile, 16th-placed Bristol City has won four consecutive home matches with a great triumph against Middlesbrough at the weekend.

Bristol City were unable to win at Ashton Gate for the bulk of 2021, leaving them to rely on their away form.

Since the end of October, the tables have shifted, with Saturday’s 2-1 triumph over Middlesbrough being their eighth win in ten games.

In the long run, Nigel Pearson’s job in the dugout is still up for grabs, but 13 points from their last nine games have kept things moving.

Bristol City’s first clean sheet in 12 games was spoiled by a last-minute goal from Matt Crooks, but Pearson will take heart from the team’s recent progress in that area.

Coventry City boss Mark Robins admitted after the defeat against Cardiff City that his club were only outsiders to make the playoffs at the end of the season.

Coventry’s late win over Barnsley on Saturday was their fourth in eight games, a decent enough return to have some of their opponents glance over their shoulders.

It was not ideal to need a last-gasp goal to beat the division’s worst team, but the Robins will be more concerned with the three-point gap between themselves and the top six.

Coventry also has a favorable triple-header coming up, however they will face Bristol City after winning only four of their 15 away games this season.

Pearson has hinted that he will rest Joe Williams for this match, which will almost certainly lead to a recall for Zak Vyner. With George Tanner, Matty James, and Andy King all out, the rest of the team might stay the same, with Cameron Pring replacing Sam Bell in the wing-back positions.

Despite the short turnaround, Robins is unlikely to make many changes to his Coventry starting lineup. With Fankaty Dabo and Jake Bidwell both well rested from the weekend, any alterations will most likely be made in the wing-back areas. Martyn Waghorn is expected to preserve his starting berth in attack ahead of Fabio Tavares, who impressed on his maiden appearance in the league at the weekend. After completing a two-game ban, Gustavo Hamer is back in the lineup. 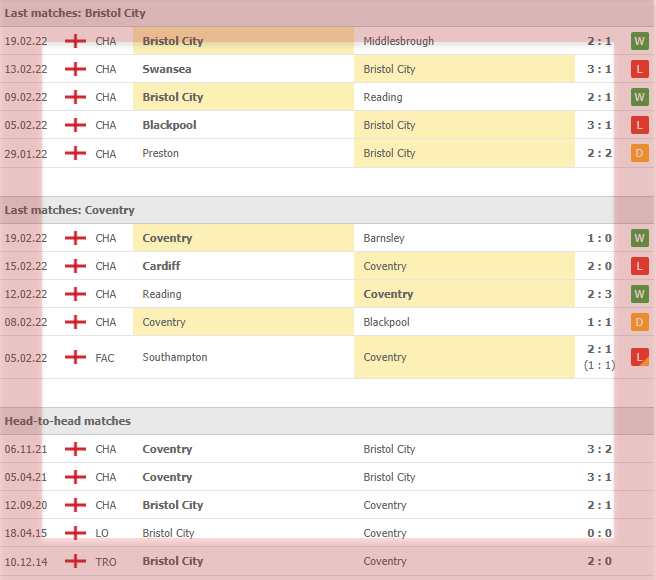