Brighton vs West Ham – Brighton & Hove Albion may only need a point to secure their first-ever Premier League (PL) top-half finish, therefore it’s fitting that they complete the season against West Ham United, with whom they’ve drawn six consecutive H2Hs! With Brighton’s Premier League points record already secured, Graham Potter and his team can expect a rousing welcome as they finish their campaign.

The ‘Seagulls’ are unbeaten in three games at the AMEX Stadium (W1, D2), including a 4-0 triumph over Manchester United in which Potter admitted to acting like a “bit of an idiot” by singing with fans after the game. If Brighton retain their unbeaten home PL H2H record (W2, D2) and finish in the top ten, the manager could be forgiven for warming up his vocal chords once more.

After losing in the UEFA Europa League semi-finals, West Ham might have easily lost their way, but they’ve bounced back strongly, most recently drawing 2-2 with Manchester City to ensure at least a UEFA Europa Conference League position next season. West Ham manager David Moyes said he “couldn’t believe” they were 2-0 ahead – unfortunately for ‘Hammers’ fans, they couldn’t hold on, but they still earned a point, ensuring them consecutive top-seven Premier League finishes for the first time.

With sixth place still a possibility if West Ham win and Manchester United lose to Crystal Palace, Moyes will want his team to win for the first time since New Year’s Day (W1, D1, L5) and send departing captain and club veteran Mark Noble out on a good note. To accomplish so, West Ham have won all five of their away league games this season in which they have broken the deadlock (W4, D1).

Danny Welbeck’s past four Premier League goals have all come in the first half, while Michail Antonio of West Ham has scored once, assisted once, and received a yellow card in his last three competitive games. 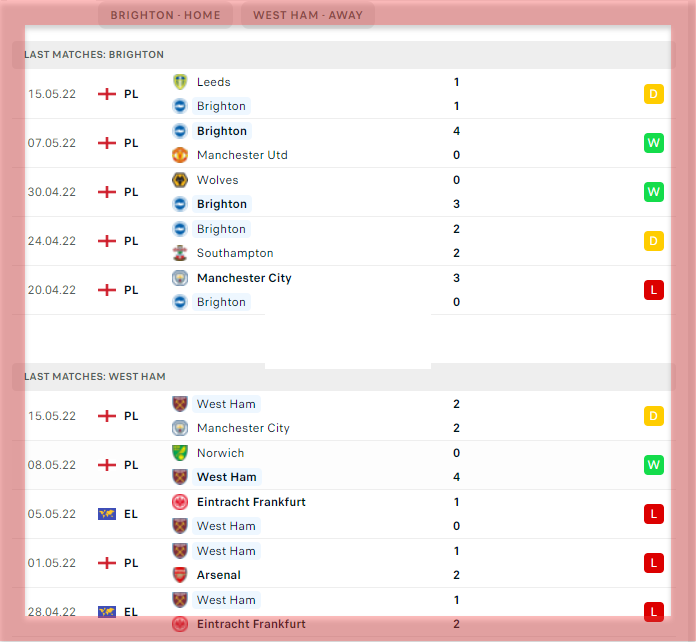