Brighton vs Liverpool – preview and prediction – team news, and lineups

Brighton vs Liverpool – Last weekend, Liverpool held off a stern West Ham United challenge at Anfield, thanks to Sadio Mane’s first-half goal, which proved to be the difference between the two teams.

The Reds are still only six points behind Manchester City at the top of the Premier League standings, with one game in hand on the Citizens, implying that the title race is wide open with as many as ten games remaining until the season’s end.

Jurgen Klopp’s men were also in action in midweek, losing 0-1 at home to Italian holders Inter Milan in the second leg of the UEFA Champions League last 16 round.

Despite a lackluster performance against the ten-man Italians, Liverpool advanced to the quarterfinals thanks to a 0-2 victory in the first leg on Italian soil.

On Saturday afternoon, Klopp’s men will look to extend their Premier League winning streak when they travel to The AMEX to face struggling Brighton in the first match of Gameweek 29.

The most recent setback came seven days ago, when they conceded two early goals in a 2-1 loss to Newcastle United.

Graham Potter’s men have only scored one goal in their last four league games, while conceding at least two in each of them.

We believe the time has come for Liverpool to improve on their dismal record against Brighton in recent head-to-head games. The visitors, who have far more quality and talent in their ranks, will enter this tie as heavy favorites.

We’d be surprised to see anything other than a resounding victory for the visitors. At odds of 2.30, you can back the Reds to win by two or more goals. 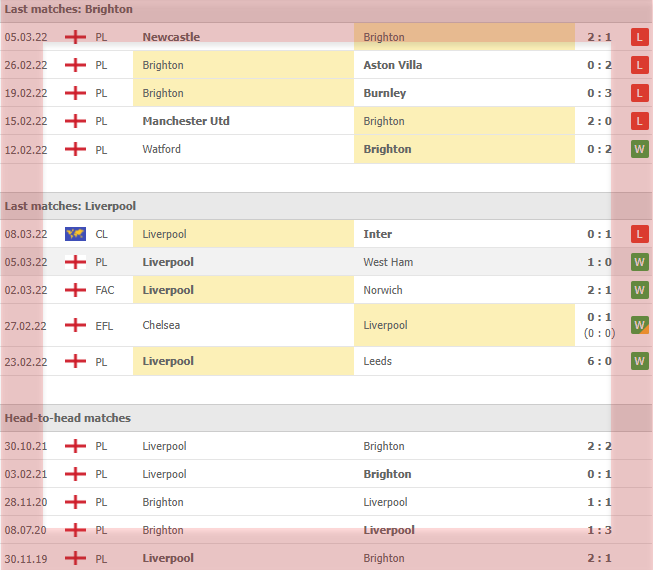