Brentford vs Newcastle – preview and prediction – team news, and lineups

Brentford vs Newcastle – Newcastle United will be looking to extend their Premier League unbeaten streak to seven games when they visit Brentford Stadium on Saturday afternoon.

The Magpies have climbed out of the relegation zone to 17th position, while Brentford are 14th, only four points above the bottom three, thanks to a strong run of results in recent weeks.

Newcastle have remained unbeaten in their last five games, despite the fact that they are one of the few clubs in the league to do so. They’ve also climbed above the relegation cut-off, with a four-point lead.

Their goal now is to keep this point differential above 18th place until the end of the season in order to avoid being relegated. This coming summer, their new management has big ambitions for the team. It’s critical that the team stays in the top tier this season.

Meanwhile, recently promoted Brentford are realizing that they aren’t yet ready to take on the Premier League’s heavyweights on a regular basis.

They haven’t won in a long time (the majority of their games have been losses), and they’re giving up a lot of points. In fact, they are one of the few clubs in the league to have gone winless in their last five games.

Ivan Toney is expected to return to the Brentford squad this weekend after a layoff, while Mathias Jensen and Mathias Jorgensen could possibly be included.

Callum Wilson, Allan Saint-Maximin, Kieran Trippier, Isaac Hayden, and Matt Ritchie are all out due to injury for Newcastle, although Javier Manquillo and Ryan Fraser may be able to fill in. 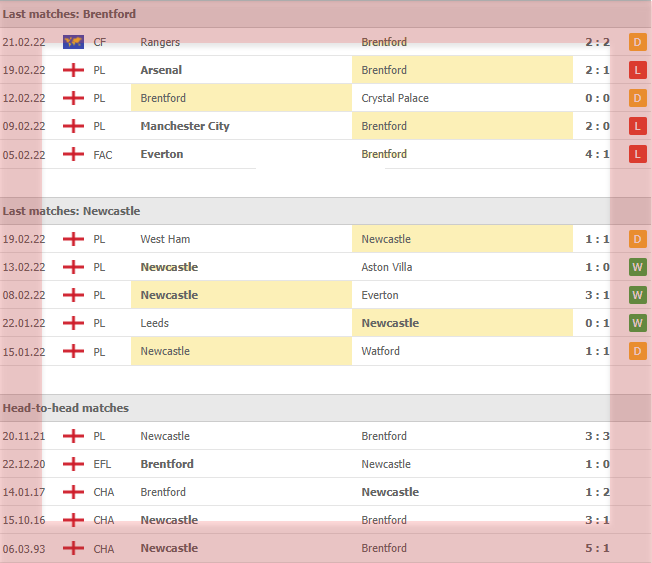