Brazil vs Serbia – Preview, and Prediction

Brazil vs Serbia –Brazil, the world’s most successful team, is about to arrive, so why bother? You are familiar with them! The Samba Magicians have a huge team at their disposal and are willing to do all it takes to win the trophy.

And Serbia, of all teams, has the misfortune of having to play them first. The Serbians may find it difficult to accept that, despite all the recent miracles they have performed, they now have to face Qatar’s toughest task of all.

In the UEFA World Cup Qualifiers, they were paired with past Euro champions Portugal, and to be completely honest, nobody anticipated that they would perform any better than a second-place result.

The players, however, had another idea in mind. They faced Portugal in the final game, where a tie would have guaranteed Portugal’s top spot in the standings. The Portuguese also enjoyed the benefit of being at home.

Aleksandar Mitrovic, however, broke Portuguese hearts by scoring the winning goal in the 90th minute when the scores were level at 1-1. After being promoted to League A in the Nations League, they are also quite happy.

Would any of this matter in the Selecao’s eyes, though? They may be the only team in this World Cup to have a surplus problem. They have so many top-tier stars in their lineup that manager Tite genuinely does not know who to field.

Neymar Jr., the team’s talisman, is also in excellent shape and in the best shape of his life. Many talented children look up to him, so this could be his time to finally shine through and seize the moment.

Since he gained notoriety at Santos, his compatriots have been putting this burden on him. Fans still vividly recall the teammates’ distraught expressions after he was hurt in the 2014 Quarterfinal.

Further, the team not only has excellent names on paper, but they have also more than earned that with outstanding achievements on the field. They have the top ranking in the world and went undefeated throughout their qualifying campaign.

They also have a strong head-to-head record versus this competitor over the years. In fact, these two faced off in a prior competition round, and the Samba Magicians came out on top, 2-0.

Note that they later advanced to the Quarterfinal, whilst the Serbians were eliminated as early as the First Round. This Thursday, as Brazil starts their bid for a sixth World Cup, expect a victory for them.

Brazil prevailed 0–2 in the most recent match during the 2018 World Cup. In the twenty-first century, they have a perfect winning record against this competitor.
They haven’t lost yet, and they’ve won all of their games. They have a 3-0 advantage overall after the last two meetings.

Except for a draw in January, the Brazilians are in such dreadful form that they remain undefeated in 2022. In fact, their last defeat was in the Copa America Final in July 2021 against their bitter rivals Argentina.

Further, they haven’t lost to a European team since 2018. It’s also important to note that in the previous four years, they have only lost to Argentina and Peru.

Serbia is also in terrific shape, but they haven’t recently had the opportunity to compete against such titans. They do have strong players, but none of them even come close to the Selecao’s stars, either on the bench or on the field.

To make matters worse, the Serbians have a worse head-to-head record than their opponent. Brazil will undoubtedly start their campaign strong.

And Neymar undoubtedly tops the charts in terms of scoring in this situation. He is the talisman and the leader. All offensive plays will be made through him, especially in this high-stress game, and he is in incredible shape.

Additionally, he is responsible for the penalty.

Brazil vs Serbia – Head -to- Head 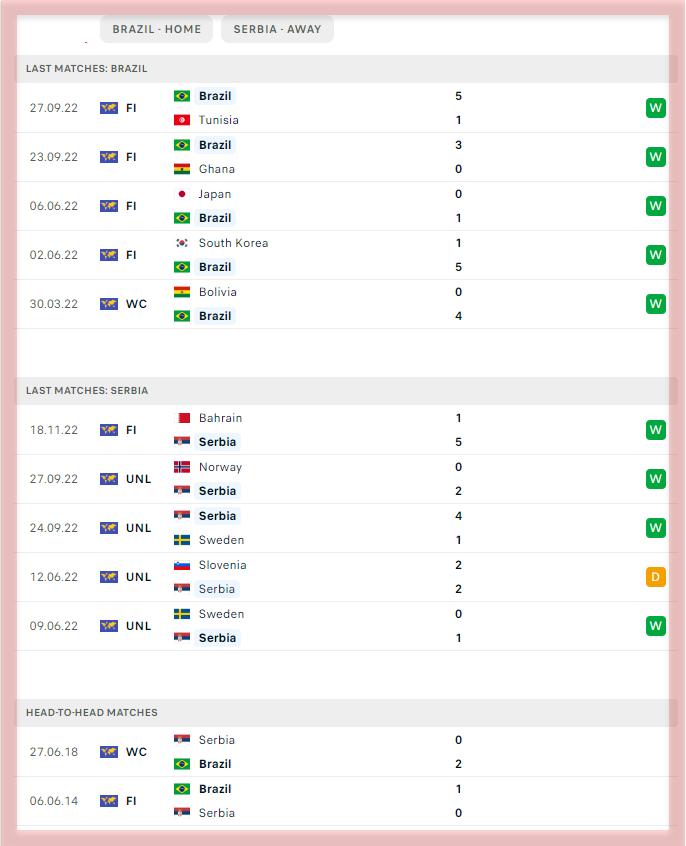