Braga vs Monaco – preview and prediction – team news, and lineups

Braga vs Monaco – The Portuguese team won the 11-meter lottery and advanced to the last 16 rounds of the UEFA Europa League by defeating Sheriff Tiraspol in penalty kicks.

Braga recovered from a 2-0 defeat in the first leg on Moldovan soil. In the rematch, they easily erased the deficit with two first-half goals (thanks to a brilliant performance from Ricardo Horta), but they just failed to find the third goal despite a massive dominance on the pitch.

Nonetheless, the team led by Carlos Carvalhal eventually advanced on penalties, securing a match against Monaco in the last 16 rounds.

Monaco, on the other hand, was eliminated from the French Cup after losing on penalties to Nantes last week at the Stade de la Beaujoire – Louis Fonteneau.

The regular-season game ended in a 2-2 tie, as Les Monegasques’ defense remained vulnerable.

Monaco conceded two goals in two consecutive games against Reims (a 1-2 home loss in Ligue 1) and Nantes (a 2-2 draw on the road in Coupe de France).

Monaco has had a disappointing season in the elite class of French football this season. They are ninth in the Ligue 1 table after 26 games, and they will travel to Portugal having won just one of their last eight league away games.

Given that Monaco has been far from their best recently, we wouldn’t be surprised to see Braga take advantage of the home pitch tomorrow. The main bet will be Under 2.5 goals FT at 1.80 odds, while more daring bettors can try Braga to win at 2.50 odds. 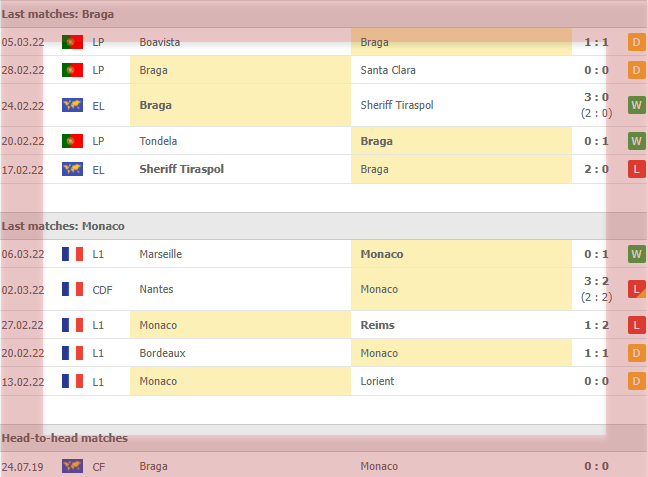