Bradford vs AFC Wimbledon – This weekend at Valley Parade, Bradford will put AFC Wimbledon’s defense to the test in League Two matchday 10. Due to their dismal performance this year, the visitors will have a challenging trip.

The season has off to a great start for the host. They are presently ranked fifth on the list. They trounced Stevenage 3-0 in their most recent league contest.

In that match, Andy Cook scored twice. However, two minutes prior to the end of regulation, Bradley Halliday was shown the red card. He won’t be available for selection as a result. The team’s winning streak was extended to three games thanks to this important victory.

The visitors, however, are having a terrible season this year. They have dropped four straight games. No other League Two squad has started the season with such a poor record. In their most recent league match, Carlisle defeated the current guests 2-1. The outcome marked AFC’s fifth loss of the season.

On August 20th, they defeated Crawley Town and earned their most recent League Two victory. Since that time, the team’s winning streak has stalled.

This month, the hosts have a respectable goal-scoring record. In their last three games, they have scored seven goals. It is important to be aware that they have scored 14 goals so far this year. Only two goals separate this from what league leaders Leyton have scored.

They have also gone unbeaten in their last five league games. The fact that Bradford has only lost 22% of their games this season is also interesting. Our first prediction, which has a 2.50 odd, is that Bradford City will keep a clean sheet. In their meetings, the host has won two straight clean sheets against AFC.

Additionally, Andy Cook will score at any time – at 2.62 odd – is our next prediction for this game. He has a total of four goals in his last two games. 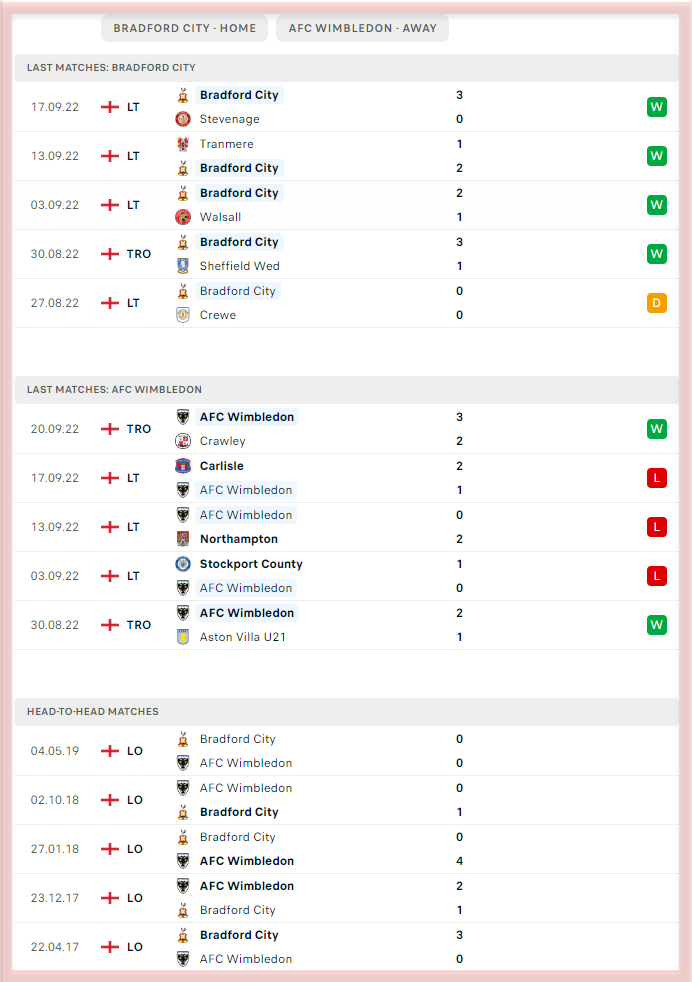