Bournemouth vs Tottenham – Preview, and Prediction

Bournemouth vs Tottenham – After consecutive losses to Manchester United and Newcastle, Tottenham will be aiming to turn things around as they travel to Vitality Stadium to play Bournemouth on Matchday No. 14 on Saturday.

Following the most recent losses, the Spurs lost contact with Arsenal and Manchester City in the top two positions of the Premier League rankings. It would be quite intriguing to see how Antonio Conte’s team does today against the inferior competition because they very much appeared toothless in both of their last two losses.

Following consecutive losses to Southampton and West Ham in the previous two rounds, Bournemouth plummeted to 14th place on the league standings. In three of their previous five league games, they were unable to score. The Cherries only made five attempts in Monday night’s 2-0 loss against West Ham.

Additionally, they have only managed to score four goals in six league games played at Vitality Stadium this year. In six home games this season, Bournemouth has an interesting goal difference of 4-5. Conversely, Spurs have also recorded two victories, two draws, and two losses in their six away games this year.

Two years have passed since these two sides last faced off, and that match ended in a scoreless draw at Vitality Stadium. In the past three head-to-head matches, the teams have each recorded a victory, a draw, and a loss.
However, Tottenham has defeated the Cherries in eight out of the last eleven head-to-head contests.

This game is crucial for Tottenham. We are all aware of Conte’s talent at inspiring his team before crucial games. Given these facts, we see Spurs as strong favorites this coming Saturday and will wager $4.50 on them to defeat Bournemouth in both halves. With up to 10 goals scored since the start of the season, Harry Kane has been outstanding for Spurs thus far. At odds of 2.20, we think it’s worthwhile to bet him to score at any time on Saturday.

Bournemouth vs Tottenham – Head To Head 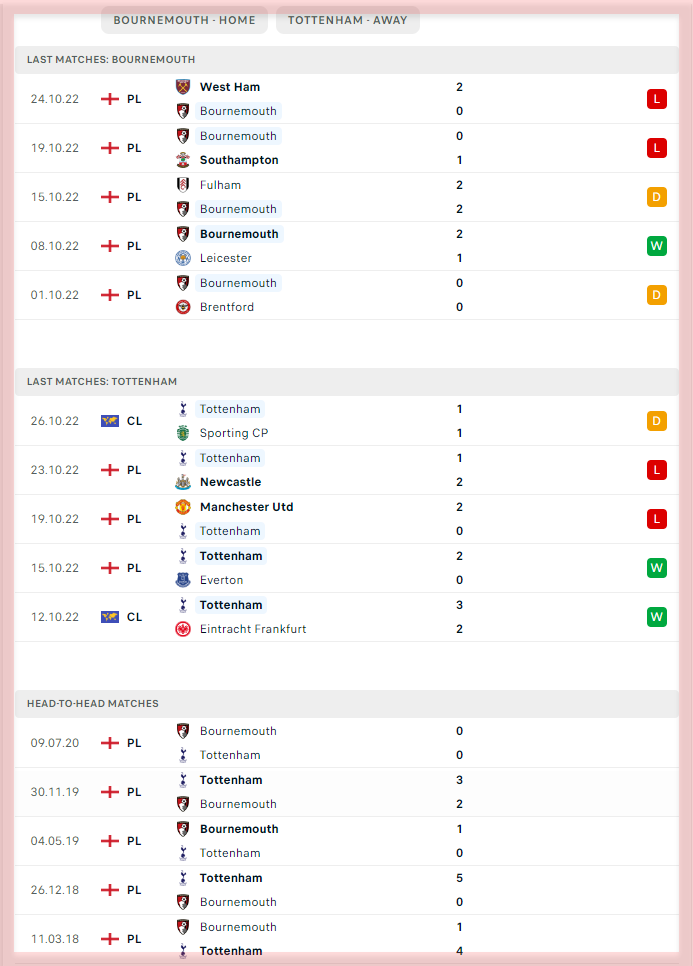