Borussia Dortmund vs Bochum –  After a 3-1 setback to Bayern Munich at Allianz Arena seven days ago, Borussia Dortmund’s season was effectively over. Dortmund’s loss in Munich mathematically secured the new title for the Bavarian heavyweights, putting Borussia in second place.

Der BVB has also qualified for the UEFA Champions League group stage next season, and they only need a single point here to guarantee a second-place finish, since they are eight points ahead of third-placed Bayer Leverkusen with three games remaining. In the last three rounds of the season, head coach Marco Rose may potentially change his starting eleven, beginning with this Saturday’s home match against Bochum.

Bochum travels to Signal-Iduna-Park after losing their previous two games to Freiburg and Augsburg. They’ve given up five goals in their last two games while failing to score a single goal on the other end. As a result, the side led by Thomas Reis has failed to score in any of the last three Bundesliga games.

They’ve had an especially difficult time scoring goals on the road this season, with only 11 goals in 15 away games (10 of which they lost). In the rematch, Bochum held Borussia Dortmund to a 1-1 draw at Vonovia Ruhrstadion in mid-December last year.
In each of the previous seven head-to-head meetings between the two teams, both teams scored, but five of these were friendly matches. In the last 31 home encounters against Bochum, Borussia Dortmund has won 18, drawn 7, and lost 6.

Bochum is now 13th in the Bundesliga table, needing a point to mathematically guarantee another season in the top level. Their recent run does not bode well for the match against Dortmund, who have won 12 of their 15 league home games this season.

We like the 2.50 odds for Borussia Dortmund to win to nil here because Bochum has failed to score in three consecutive Bundesliga encounters. At 1.95 odds, we’ll also back the hosts to take the lead at halftime and win the match in the end. 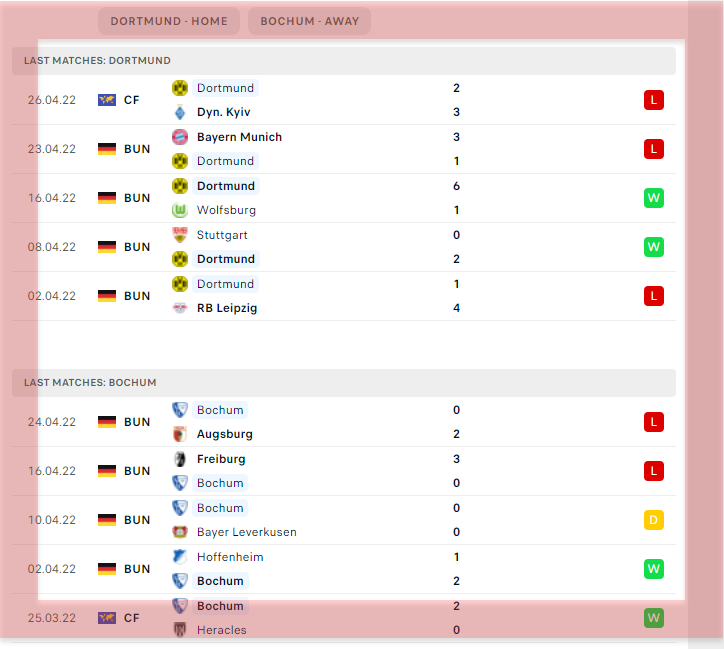