Bolton vs Portsmouth – preview and prediction

Bolton vs Portsmouth –Portsmouth will travel to University of Bolton Stadium today to face the Bolton Wanderers in the 40th Round of League One, with only a single point separating them.

Bolton is ranked 11th in the league with 58 points from 39 games. In the league, they won 17 times, drew seven times, and lost 15 times. The hosts’ league form has been inconsistent recently. They do, however, have a strong offensive lineup and an average defensive lineup.

In their most recent league match, Bolton Wanderers defeated Crewe 1-0 on the road. The aforementioned victory came after they had gone two games without a win. Ian Evatt’s men have scored eight goals in their last six games. In contrast, the number of goals scored against them in those games totals five.

Portsmouth, on the other hand, sits just above them in 10th place on the table with 59 points. They won 16 of the 38 games they played, while drawing and losing 11 of them. They are currently on a three-game losing streak in the league.

Portsmouth drew 0-0 with Wycombe Wanderers in their most recent League One match. They have only conceded four goals in their last six games. During the same time period, they have scored a total of ten goals.

Bolton has won six of their last eight home games. However, they haven’t won at home in the last two league games. In addition, the hosts have not won against Portsmouth in their last four league games.

Portsmouth are still undefeated against the hosts when they have played them away from home in the previous two league matches. However, they have gone two games without a win on the road in the league.

We predict an away win or draw because Portsmouth has a strong head-to-head advantage over this opponent. 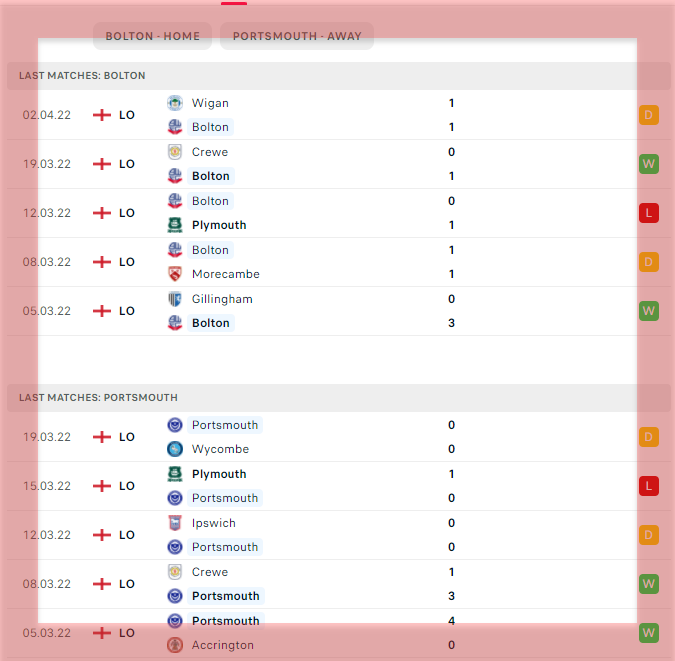