Bohemians vs Finn Harps – As they face the above-mentioned Bohemians, the relegation-fighting Finn Harps will be looking to reverse the tables. This Friday, they will meet at Dalymount Park in the Premier Division’s 10th round.

With 11 points from nine games, Bohemians sits in sixth place in the standings. They each won and lost two matches, while drew five times. The hosts had put together a strong run of form, going two games without losing. They have a lot of potential for development on the offensive side.

Bohemian FC enters this match after a 1-1 tie with Drogheda United in the Premier Division. In five of the last six games in which they have played, they have scored less than three goals per game.

Finn Harps, on the other hand, are in 9th place on the table with only 6 points. They only won one of the nine games they played, drew four times and lost five times. They had gone scoreless in four games this season, accounting for 44 percent of their total games.

The visitors were defeated 1-2 by Derry City in their previous league match. Looking at their recent form, Finn Harps have been outscored in five of their previous six games, allowing a total of 12 goals. Their defensive flaws have been revealed, as they have conceded twice as many goals as they have scored.

Bohemians will be confident in their ability to score today, and will want to continue their streak of scoring in every home game this season. They’ve also gone undefeated in their last two games entering this one. Finn Harps, on the other hand, have only won one of their nine games this season and have lost twice in their past three league schedules. Expect a home victory on Friday, based on the current situation. 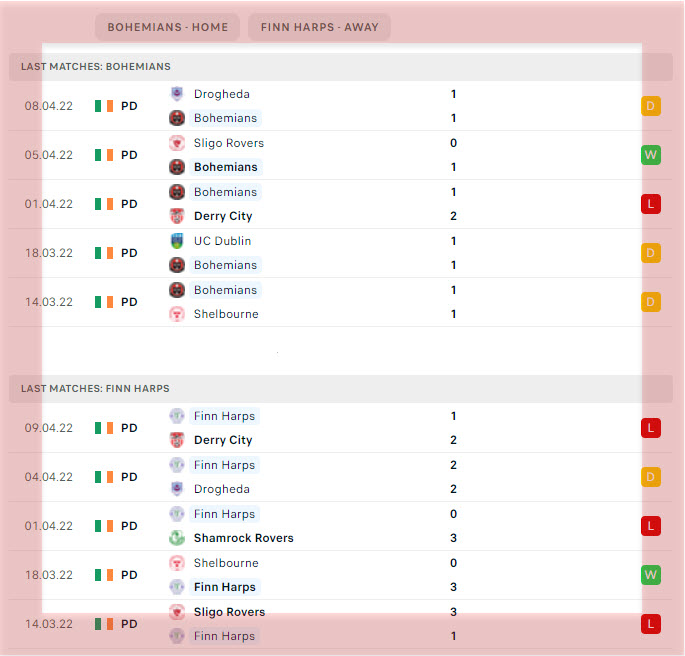 Our Prediction: Both Teams to Win