Bodo/Glimt vs Tromso – Preview, and Prediction

Bodo/Glimt vs Tromso – This season has started off slowly for Bodo/Glimt. So far this season, they have won two, drawn two, and lost one of their five league games. Their offensive and defensive units appear to be adequate and will provide them with positive energy.

In their most recent league match, Bodo/Glimt drew 1-1 at home against Lillestrom. With that draw, they have now gone two games without winning in the league. They’ll be trying to break their losing streak with home advantage in their next game.

Tromso, on the other hand, has had a slow start to the season. Their physique does not appear to be particularly outstanding. This season, they have only won one of their five league games. As a result, they are currently in the relegation zone in 14th place on the standings.

In their most recent league match, Tromso drew 1-1 with Jerv on the road. With that draw, they have now gone three games without a win in the league. They’ll be hoping for a better outcome in their upcoming league games.

Bodo/Glimt have won all five of their previous meetings with Tromso, and Each of the five head-to-head matches was a high-scoring contest. Bodo/Glimt won 3-0 in their most recent meeting at this location.

Bodo/Glimt have started the season with unblemished performances at home. This season, they won one and drew two of their three league games at home. In two of those three home games, their offensive line scored two or more goals.

Tromso, on the other hand, is yet to win on the road this season. So far this season, they’ve drawn two and lost one of their three league road games.

Furthermore, Bodo/Glimt have a solid recent record versus Tromso. As a result, we believe Bodo/Glimt will defeat Tromso in an Eliteserien matchup on Sunday. 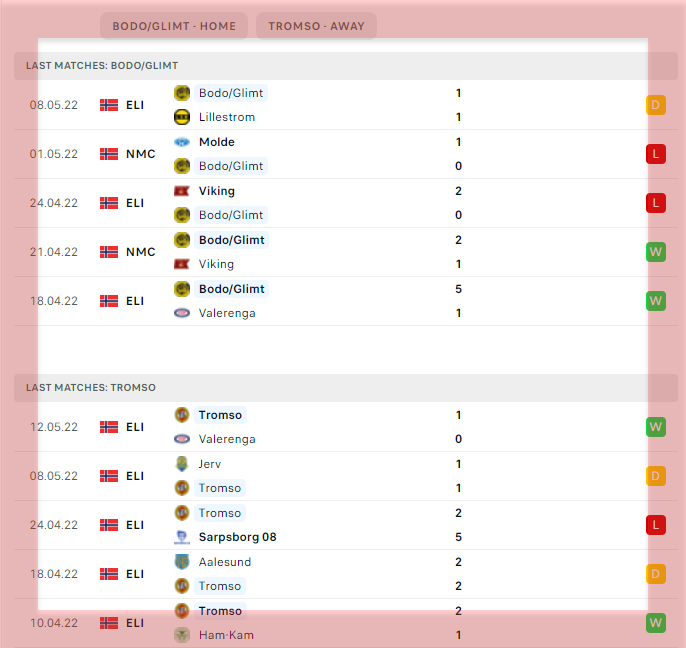