Bochum vs Augsburg – Preview and Prediction

Bochum vs Augsburg – On Sunday afternoon, Bochum hosts Augsburg in a low-key Bundesliga match at Vonovia Ruhrstadion. Neither team is in particularly good form heading into the match. They’re separated by four points in the Bundesliga’s bottom half, but they’re still a long way from the relegation zone.

Augsburg is in a more difficult situation, since they are only four points ahead of Stuttgart, who are currently in the relegation playoffs. With a loss today, the visitors might be dragged into the relegation battle. Last Saturday, they blew a significant chance to dispel any doubts about the elite class’s existence by losing 0-1 at home to relegation-threatened Hertha Berlin.

Augsburg suffered their second consecutive 0-1 defeat, with only two efforts on target in their last match against out-of-form Hertha Berlin. Augsburg is particularly bad on the road, having lost five of their last six Bundesliga games. This will be music to Thomas Reis’ ears, as Bochum has won the majority of their points so far this season at Vonovia Ruhrstadion. Bochum won seven, tied four, and lost only four of their 15 Bundesliga home games this season.

They have, however, been struggling for goals recently, having failed to score in three of their last four home encounters ,These two sides have already met twice this season, and both times have resulted in goal fests. Bochum won the DFB Pokal tie on penalties following a 2-2 draw in the regular season, and they also won the reversal game 2-3 in the first half of the Bundesliga season  ,It had been exactly a decade since these two rivals had clashed before this season.

Neither team is performing well in the last third these days. Regardless of the H2H trend, the Under 2.5 goals FT appears to be a good betting option at 1.90 odds. We also prefer Bochum to win at 2.30 odds because Augsburg has been struggling on the road recently.

Bochum vs Augsburg – Head to head 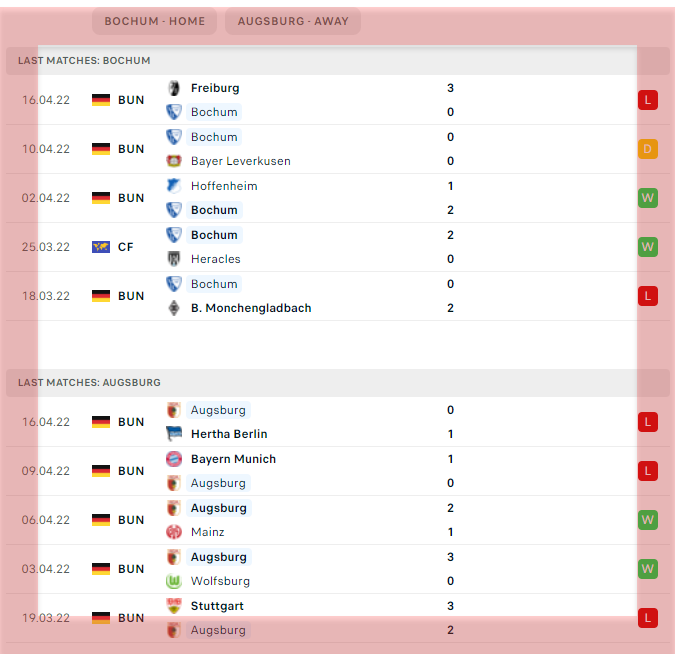