Marko Kostmann’s team put up a poor performance at SchucoArena, scoring the late equaliser with their lone attempt on target in the first minute of added time.

Bielefeld now faces an impossible task in avoiding relegation in the final two games, given that they will also face RB Leipzig (who are targeting a top-four finish) on the final day of the season.

To make matters worse, Arminia will face Bochum in the first game of Matchday No 33 at Vonovia Ruhrstadion on Friday evening. Bochum defeated second-placed Borussia Dortmund 3-4 at Signal-Iduna Park just six days before this match.

Bochum can possibly break into the top half of the Bundesliga standings with excellent performances in the final two games of the season.

They are clear favourites to win this match against Arminia Bielefeld, who have gone nine league games without a win.

Arminia Bielefeld has won three and drawn one of the last four official encounters between the two clubs. In 2020, there will be a friendly match.

Their recent winning streak includes a 2-0 win at SchucoArena in mid-December last year.

Arminia Bielefeld, on the other hand, has only managed to defeat Bochum five times in their previous 24 visits to Vonovia Ruhrstadion.

The home win is the best bet at 2.15, but you can also back Bochum to score two or more goals in the evening at 2.00. 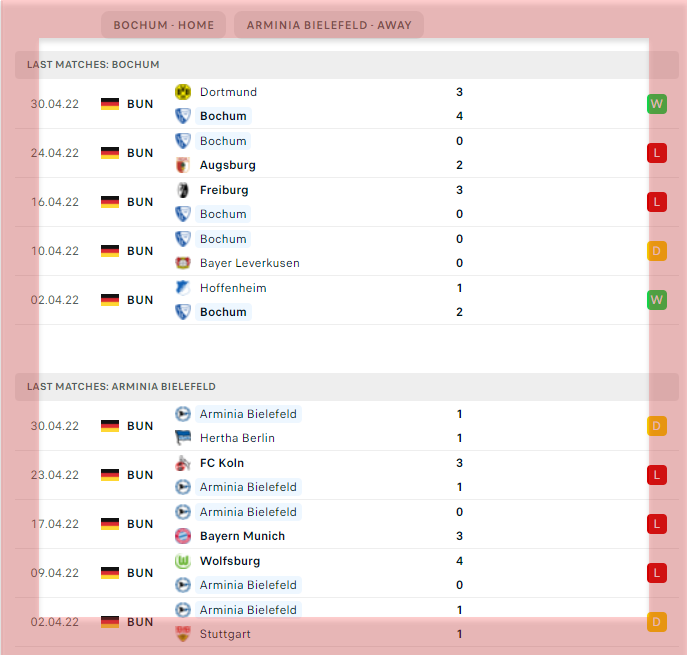