Boca Juniors vs Corinthians – Boca Juniors host Corinthians at La Bombonera in Buenos Aires on matchday five of the Copa Libertadores. The six-time champions of this event have not surrendered a goal in five straight matches in all competitions since losing 2-0 to Timao in late April. Corinthians fought back from two one-goal deficits to draw 2-2 with Internacional last weekend. Boca trails Corinthians by one point for first but is just two points ahead of Always Ready with two matches left. Sebastian Battaglia’s team lost two of their first three games 2-0.

Former defender who won this trophy four times with Xeneizes won’t be thrilled with his team’s performance against Racing Club at home. They had a 70% pass accuracy and no shots on goal. They haven’t conceded at this stage of the competition since 2019, outscoring opponents 13-0 in their previous seven matches. Boca rarely let a first-half lead slip away, failing to do so since December 2018, when River Plate overcame a 1-0 deficit to knock them out 5-3 on aggregate.

The 34-time Argentine champions push in triangles to avoid counterattacks. Time do Povo is leading in Campeonato Brasileiro Serie A and advanced in the Copa do Brasil last week. Timao, in the group stage for the first time since 2018, will try to beat Boca Juniors at home. Corinthians have always finished top in their group since finishing second to Flamengo in 1991.

Vitor Pereira won two Portuguese Primera League titles with FC Porto and will try to bring this team its first trophy since 2019. But they’ve only lost one of their last five road games in all competitions, and they’ve yet to score in two Group E games. Corinthians’ attacking midfielders have created chances while playing in a restricted formation. 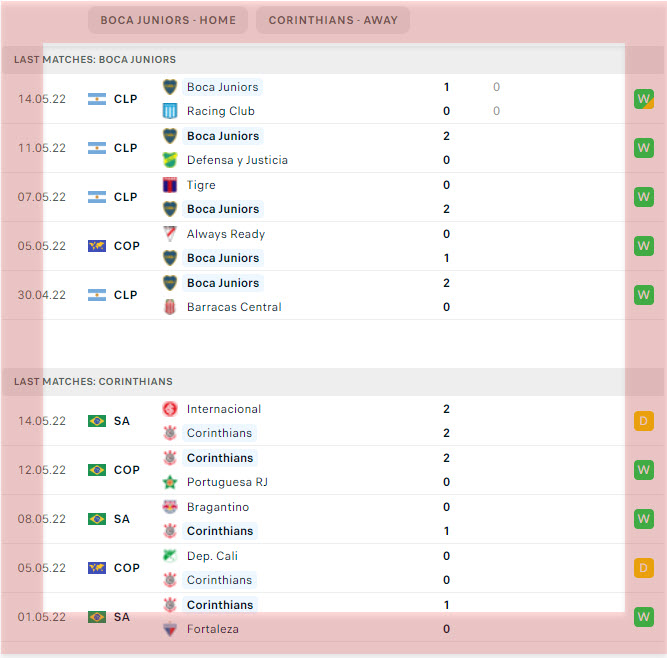