Blackburn Rovers vs QPR – In the previous Championship season, Blackpool performed about as well as expected. At the end of the year, they were not able to make it into the play-off spot.

They are aiming to win it this year by maintaining a winning record. The past season was mediocre for QPR as well. They finished two spots and three points below Blackburn, in 11th place.

Their frequent recording of a loss is mostly responsible for placing them outside the table’s secure zone. In the last 10 matchups between these two teams, Blackburn has a 7-3 record.

There have been a total of 10 head-to-head matchups between these two teams, and in half of them, the both teams to score choice has paid off. In their most recent meeting at this stadium, Blackburn emerged victorious, 1-0.

Blackburn fans viewed the exhibition games well. They’ve gone nearly unbeaten against teams that, on paper at least, should have beaten them more often than not.

Home form was particularly poor toward the close of the previous season. Their three-game losing streak at home at the close of that season is still active. Their previous performances, however, against teams like Lincoln, Hartlepool, Celtic, etc., guarantee a good showing.

However, QPR have also won most of their recent exhibition games. Regardless, they played teams that weren’t nearly as strong as Blackburn’s. They played Crystal Palace, a respectable team, and lost by a score of 0-3.

Late in the previous season, QPR’s away form was absolutely abysmal. In their most recent away friendly games, we see them going undefeated, but those were against lesser opposition. 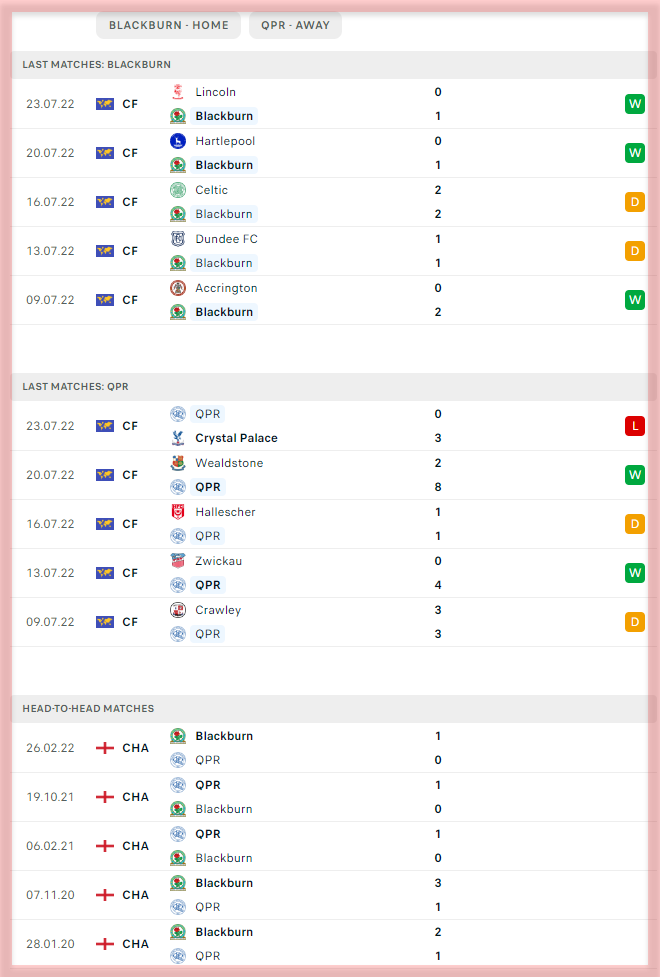