Besiktas vs Kayserispor – Preview, and Prediction

Besiktas vs Kayserispor -Besiktas will make an effort to forget the previous season as quickly as possible because their sixth-place result did not even guarantee them a spot in this season’s European competitions.

The Black Eagles will enter the 2022–23 Super Liga season with a completely new outlook and the desire to begin a new chapter.

Between the two seasons, Besiktas made a lot of adjustments to the roster. They appear to be considerably stronger on paper thanks to numerous high-profile additions, particularly those from English Premier League clubs.

Thus, the Black Eagles were able to sign Cenk Tosun of Everton, Romain Saiss of Wolves, Wout Weghorst of Burnley, and Arthur Masuaku of West Ham.

The incredibly gifted Gedson Fernandes from Benfica, as well as Valentin Rosier, Jackson Muleka, Emrecan Uzunhan, etc., are also on the list of additions.

A very competitive preseason schedule for Besiktas included games against teams like Mainz, Wolves, Alaves, and Sampdoria. In the final preseason test seven days ago, they drew 1-1 with Sampdoria of the Italian Serie A.

On the other hand, Kayserispor appear to be less strong than they did the previous year, when they placed in the lower half of the Super Lig standings.

Last season, Kayserispor often put on far worse performances away from home. In the previous Super Lig season, they were victorious in just 2 of 19 away league games.

We scarcely see any other possibility here but a resounding victory for the hosts. At odds of 2.35, you may wager on Besiktas to win by two goals or more.

The Over 2.5 goals FT & Both Teams To Score option was selected. In their last 21 home games against Kayserispor, Besiktas has had 14 victories, 3 ties, and only 4 losses. 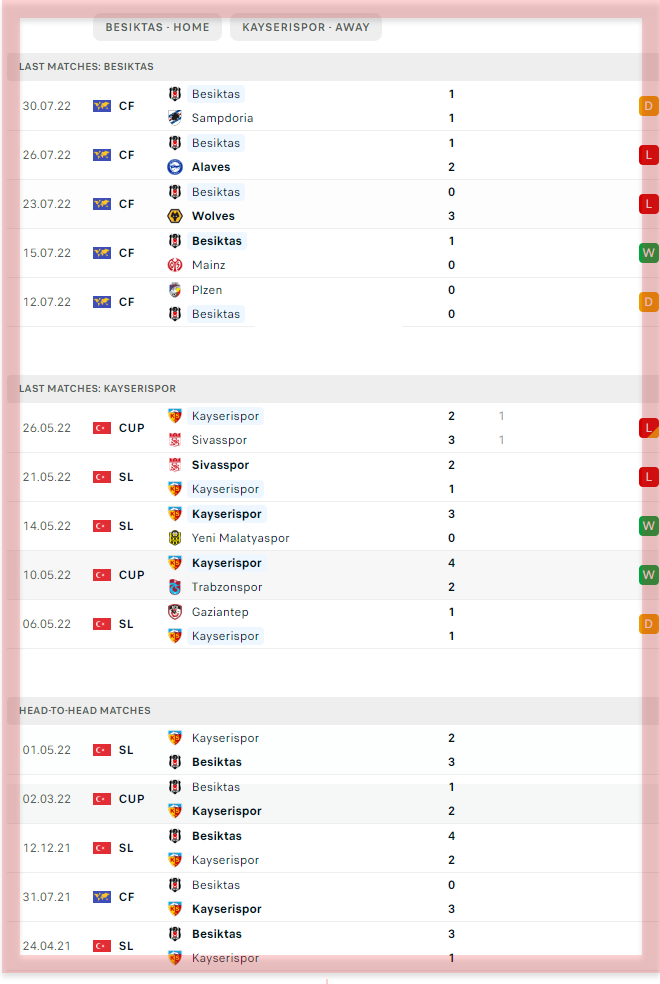