Benfica vs Maccabi Haifa – Benfica will soon embark on a challenging season. They are under a lot of strain because they were drawn into a Champions League group that is rather challenging. They will be aiming for victory against the Israeli champions Maccabi Haifa on Tuesday in front of their home crowd.

The previous season, Maccabi Haifa did win the Israeli league with style, and they have also had a strong start to the current one. In addition to consistently scoring goals, they are also playing well defensively.

They do, however, badly lack experience playing in continental matches, particularly against teams like Benfica, who are leagues above them in terms of skill.

The previous season, Benfica finished third in the premier division of Portugal, and they had consistently produced some incredibly outstanding performances.

And it deserves extra praise since they have gained a lot of momentum from their recent home games, and they will once again hope for a successful outcome at this site.

They currently hold the first spot in the Primeira Liga standings for the current campaign and have a perfect winning percentage. It should be noted that they have continued their excellent home form into the current campaign. Looking from the current situation, it appears like Benfica will win this Tuesday at home.

First-time rivalry between these two teams. The incredible 15-match winning streak for Benfica includes 14 victories in which they have scored two goals or more. In fact, 10 of their previous 13 games saw them score three goals or more. In contrast, Maccabi Haifa had lost seven out of their previous 13 games overall, and they had even started a four-match losing run.

Additionally, in the previous six months, they had only triumphed five times away from home, and during that period, they had even started a three-game losing skid. Expect Benfica to win on Tuesday in light of the observations made above as well as the inexperience of Maccabi Haifa in Europe. 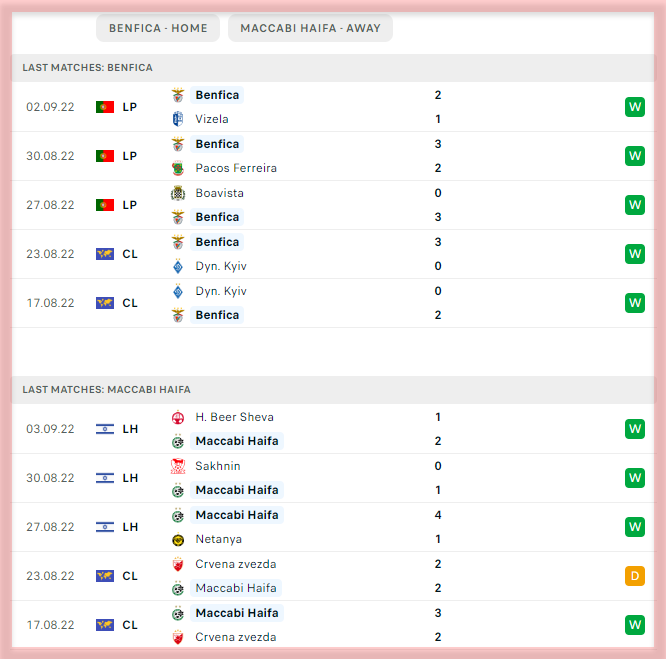