Benfica vs Chaves – Preview, and Prediction

Benfica vs Chaves – Based on their accomplishments this season, Benfica might be among the best teams in all of Europe. They are unquestionably the favourites to defeat Chaves this weekend because they are in complete possession of the top slot in the Portuguese top division.

One of only three clubs still playing in Europe that will lose this year is Benfica. Furthermore, in their Champions League group, they competed with teams like Juventus and PSG.

They are currently tied for first place in their CL group with PSG on points. They are also unquestionably at the top of the Liga Portugal standings. With only one tie, they enjoy a perfect winning record and an early six-point lead.

Additionally, they have a combined record of 24-5 in their first ten games. Only four victories have been recorded by Chaves, and two of their last three road trips have been in defeats.

They currently behind the leaders by 13 points, and more crucially, they have a dismal all-time record versus this competitor. For these reasons, Benfica should triumph at home on Saturday.

The most recent game saw Benfica prevail 4-0. With the exception of one game since 1998, they have a perfect winning record. Since 1999, the hosts have never lost at this location.

In every game played here over the past 20 years, they scored three goals or more. Benfica has been unbeaten for a considerable amount of time—nearly six months. The majority of these games were victories, and they consistently scored a lot of goals.

They are also playing at home, where they have a perfect record of victories so far. Chaves, on the other hand, have struggled significantly in previous head-to-head matches over the years, particularly at this arena, in addition to having a very variable set of results.

Benfica vs Chaves – Head -to- Head 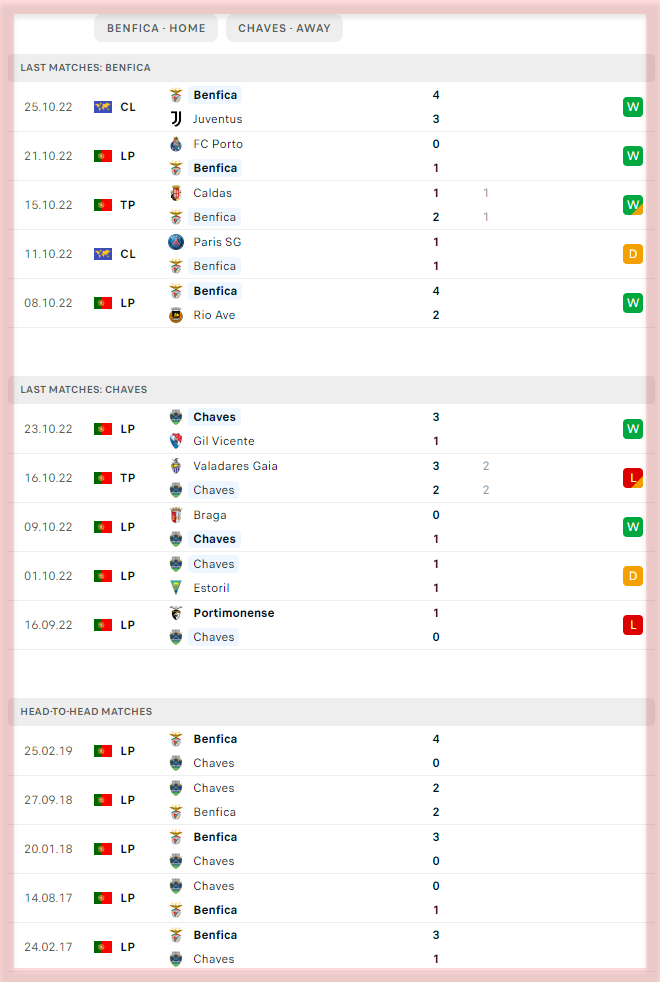