Benfica vs Ajax – preview and prediction – team news, and lineups

Benfica vs Ajax – Two unfancied names for the Champions League crown lock horns in the first leg of their last-16 clash on Wednesday, as Benfica play host to Ajax at the Estadio da Luz.

Nelson Verissimo’s side finished second in Group E to advance to the knockout rounds, while their opponents strolled through Group C without dropping a single point.

Many would believe they properly predicted the conclusion of Group E before the first ball was kicked, but although Barcelona continued to underperform under Ronald Koeman, Benfica seized full advantage to finish second behind Bayern Munich.

The Bavarians galloped off into the sunset as expected, but Benfica won two crucial games against Barcelona and Dynamo Kiev – the former’s 3-0 thrashing will live long in the memory – and drew a goalless draw at Camp Nou to advance on the basis of their head-to-head record.

However, the days of Jorge Jesus are long gone as former Benfica youth Verissimo attempts to lead his side to the quarter-finals for the first time since 2015-16, although his first ten games in charge have delivered a mixed bag of results.

Erik ten Hag continues to supervise great growth at Ajax, who swept off the competition in Group C to finish first with 18 points, refusing to let continuing rumours around the Manchester United post affect him.

Sebastien Haller, the 10-goal striker and current Champions League top scorer, scored in every single one of his team’s group games, including four in their opening-day 5-1 thumping of Sporting Lisbon, making his ill-fated tenure at West Ham United seem like a distant memory

Only Bayern Munich (22) scored more goals in the group stage than Ajax (20), and Ten Hag’s team enters the first leg having won each of their past 10 games in all competitions, although needing a late Jurrien Timber strike to beat Willem II on Saturday.

A group of Benfica players will be on a tightrope in the first leg, as Julian Weigl, Nicolas Otamendi, Joao Mario, Rafa Silva, and Alex Grimaldo will all be suspended for the second game if they receive a booking.

Verissimo’s decision is unlikely to be influenced by such worries, but the home side is missing Haris Seferovic, Rodrigo Pinho, and Lucas Verissimo – none of whom are related to his manager.

There’s still a chance that Seferovic will be available for the first leg, but it’d be strange if Verissimo didn’t call on Roman Yaremchuk and Darwin Nunez in any event.

Brian Brobbey and Maarten Stekelenburg are still out of the running, and Ten Hag must decide whether to reintroduce Andre Onana or stick with Remko Pasveer, who is 38 years old.

Otherwise, the visitors have no need to deviate from their winning formula, though Ryan Gravenberch will be hoping to unseat Davy Klaassen in the engine room. 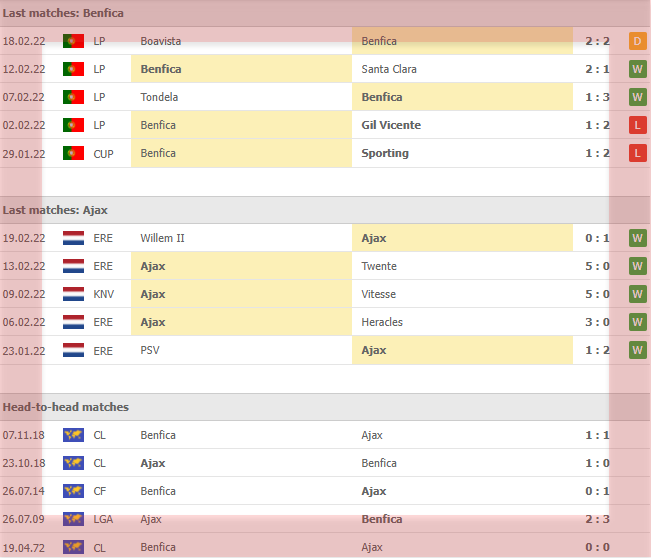