Benevento vs Pisa – Preview, and Prediction

Benevento vs Pisa – Benevento and Pisa will face off in the Serie B promotion playoff semi-finals on Tomorrow night, with the first leg taking place at Stadio Ciro Vigorito. On Friday, the hosts defeated Ascoli 1-0 to set up the match with Pisa, who finished third in the regular season, two points behind second-placed Cremonese.

Benevento finished seventh in Serie B with 63 points from 38 games played during the regular season, and they faced Ascoli in the quarterfinals of the promotion playoffs on Friday. Benevento’s tight match was settled by a single goal in the 38th minute, with Gianluca Lapadula’s effort guaranteeing that Benevento would advance to the semi-finals, where they would face Pisa in the last four.

Fabio Caserta’s club had lost their previous three regular-season games, but they came back to win a crucial match against Ascoli. They’ll try to take the lead on Tuesday before the second leg, which takes place on May 21 in Pisa. Gli Stregoni finished 18th in Serie A in 2020-21, relegating to the second tier, and are now attempting to return to the top flight at the first time of asking. Caserta’s club has lost 11 league games this season, yet they were the top goal scorers in the regular season, with 62 goals.

Pisa, on the other hand, finished third in Serie B with 67 points from 38 games, two points behind second-placed Cremonese, who were promoted immediately. The Black and Blues were in the third division as recently as 2019, thus promotion to the top flight of Italian football would be a significant achievement. Luca D’Angelo’s team finished the regular season with a 2-1 win against Frosinone, and they had only lost one of their last six games, which was away to Lecce in late April ,Pisa lost 5-1 to Benevento earlier this month, but won 1-0 at Arena Garibaldi last November.

Pisa will be in better form and will have had more time to prepare for this match, but Benevento has a lot of quality in the final third, so we’re picking the home team to take a slender lead into the second leg. 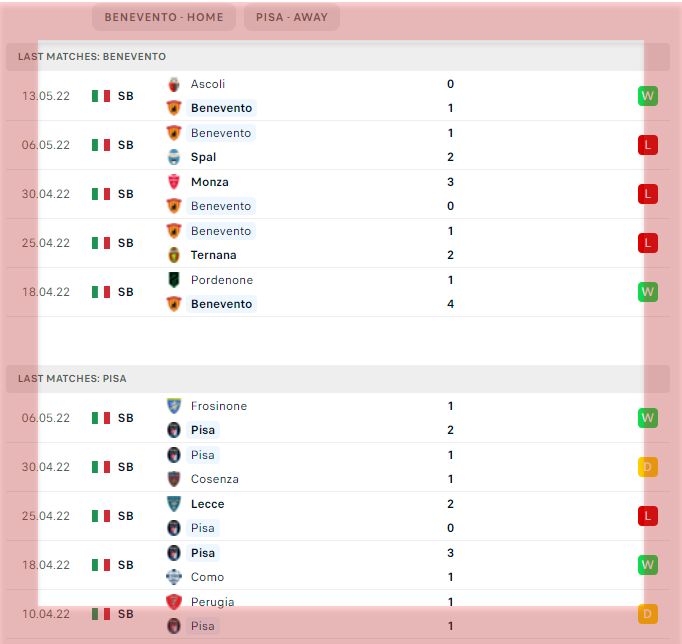