Belgium vs Wales – Preview, and Prediction

Belgium vs Wales – Belgium is ranked second in the Nations League, trailing the leaders by three points in perhaps one of the hardest divisions. They must go all out to defeat Wales, who will be fighting like hell to stay in the league, this Thursday in front of their home crowd.

The Welsh are without a doubt the worst of the bunch. With the exception of one tie, they are ranked last on the table and have a 100% losing record. Of all the teams in the competition, they scored the fewest goals and allowed the second-fewest to find the back of the net.

Even though they are already mathematically eliminated from contention for a place in the semifinals, they still have a concern. They will be demoted to the lower division if they finish last in the table at the conclusion of the group stage campaign.

They will work quite hard to stay away from this. So, on Thursday, we can anticipate them to provide a spectacular performance while under pressure. However, they are travelling and facing off against a team that may be among the greatest in the world.

The Belgians are steadfastly committed to developing their talented group of players. They have frequently missed out on fame by a whisker, and this time they feel that victory is due.

Additionally, the Welsh have historically fared poorly against this competitor. As things stand, on Thursday at the King Baudouin Stadium, Belgium is predicted to win.

The most recent match resulted in a 1-1 draw. Both sides scored in each of the previous four matches. Three or more goals were set for two of the prior four encounters.

Wales hasn’t been able to defeat this opponent in six years. In seven of their last eight games overall, Belgium was unbeaten. In actuality, they only lost once in the previous eleven months, and that was to the hot Netherlands.

Additionally, they are playing in front of their own fans, in front of whom they have always performed at their very best. Wales, on the other hand, has lost three straight games and six out of their last eight games combined.

They are not only wholly winless in the Nations League, but they also have a wholly losing road record. Based on these observations, anticipate Belgium to win this Thursday.

Belgium vs Wales – Head -to- Head 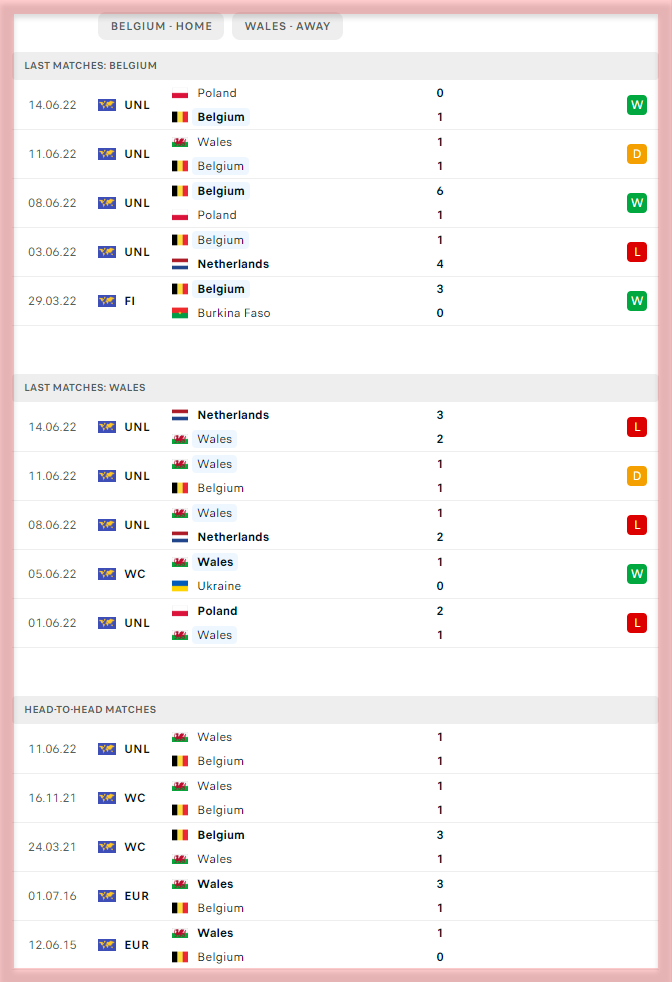