Bayern Munich vs Salzburg – The Bavarians were stunned in the first game, drawing 1-1, and all eyes are on the second leg. This could be the season’s biggest upset. The famous Bayern Munich is being thrashed by some Austrian minnows.

However, the chances of this happening are extremely slim. For starters, the second leg will be held at the Allianz Arena, where a large audience will be present. Second, the Bavarians will be anxious to show the rest of the world that the 1-1 tie in the first leg was purely coincidental. They must reclaim their reputation as ‘killers.’

And all of this is expected to be overwhelming for Salzburg. They already have a dreadful head-to-head record versus the German champions, as well as other Bundesliga teams.

The first leg resulted in a 1-1 tie. But that’s no longer the case. This forthcoming match will be well-prepared by the nine-time defending German champions. For years, the Allianz Arena has been a stronghold for the team, and it has hosted some of Europe’s heavyweights. The visiting Austrians will undoubtedly be enormous underdogs on Tuesday.

Furthermore, Salzburg has struggled to perform well on the road this season. In reality, they’ve only won three games on the road in the last five months, one of which was against a lower-division opponent (OFB Cup game). 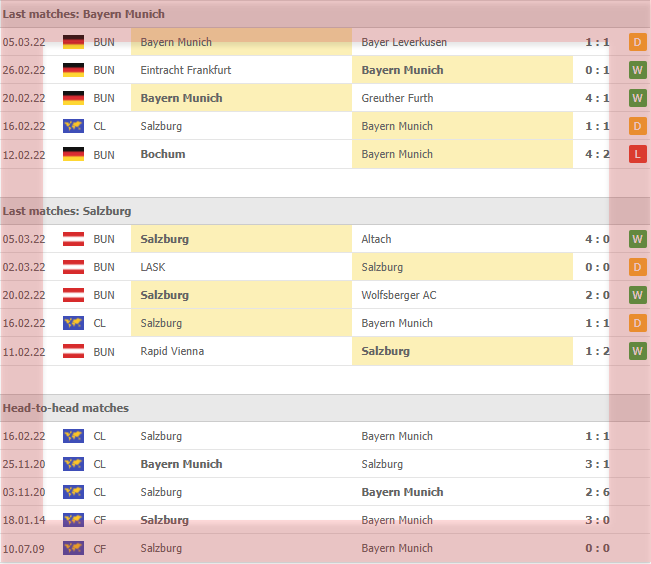 Our Prediction: Over 2.5 Goals FT

Although Salzburg performed admirably in the first leg last month, we are hesitant to endorse the Austrians to advance tomorrow evening. Bayern has so much attacking talent that we expect them to score three times and book their place in the competition’s quarter-finals.