Bayern Munich vs Eintracht Frankfurt – After a 1-1 draw with Cologne in Bundesliga 1, Bayern Munich will take the field in this game.

In that contest, Bayern Munich controlled 78% of the ball and made 25 shot attempts, only one of which was successful. Joshua Kimmich (90′) was the lone player to score for Bayern Munich.

Three goal attempts were made by Köln, and one of them was successful. Cologne’s Ellyes Skhiri scored after four minutes.

Bayern Munich has had no trouble finding the back of the net, scoring in each of their previous six games.

They have accrued 15 throughout that time, compared to the five goals that have been scored against them. Leaving that aside, we’ll just have to wait and see if this pattern appears again in the next game.

According to the form guide going into this match, Bayern Munich:

Eintracht Frankfurt is coming into this game with momentum after beating Schalke 3-0 in their last Bundesliga 1 match.

In that match, Eintracht Frankfurt had 44% of the possession, and 3 of their 12 shots were on goal. Eintracht Frankfurt’s goals were scored by Jesper Lindstrm in the 21st minute, Rafael Santos Borré in the 84th, and Aurélio Buta in the 91st.

Schalke 04 made 19 goal attempts, and none of them were successful.

Their defenders have witnessed seven goals scored by their opponents during that time.

In their previous meetings, which date back to June 10, 2020, Bayern Munich has won four of them and Eintracht Frankfurt has won two. There have been no draws.

In total, 22 goals were scored in those contests, which works out to 3.67 goals per match.

The previous league matchup between these clubs took place on August 5, 2022, on Bundesliga 1 Match Day 1, and the final result was Eintracht Frankfurt 1-6 Bayern Munich.

In that contest, Eintracht Frankfurt had 37% of the possession, and 2 of its 8 shots on goal were successful. Randal Kolo Muani (64′) was their lone scorer.

Bayern Munich can and should control the ball and generate a number of good chances, in our opinion. However, Eintracht Frankfurt may struggle to reach the net on their own, but we still expect them to score

Looking at what the bookmakers’ view is of this game in the 90-minute result market, a win for Bayern Munich is best priced at 1.33, betting on the draw is 5.85, and betting on the win for Eintracht Frankfurt can be had at 8.2. They are the most competitive market prices available at present. 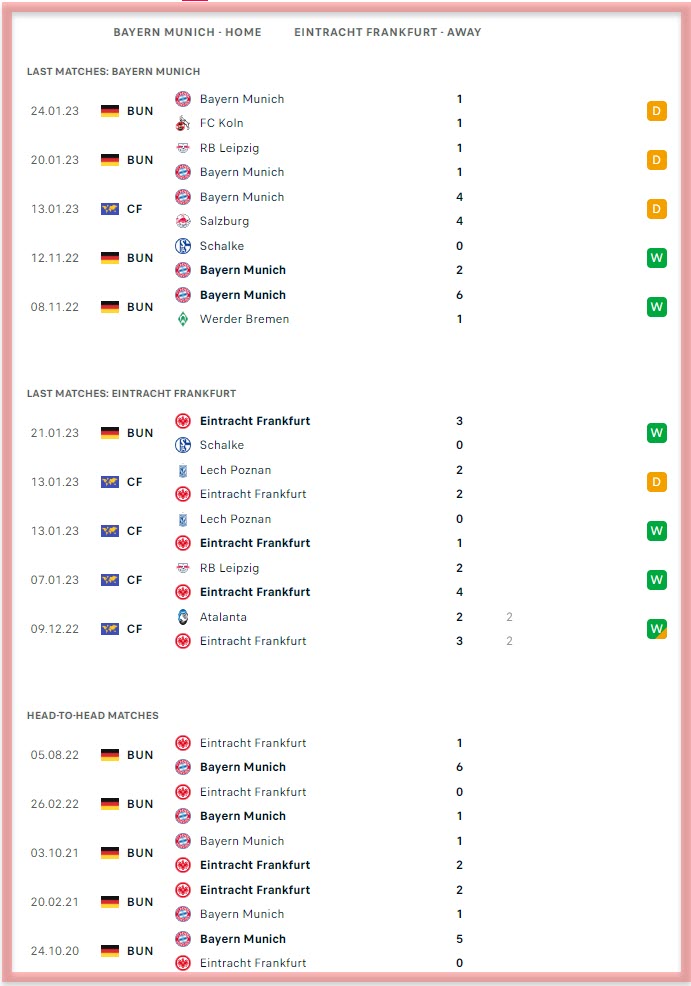