In that game, Bayer Leverkusen had 39% of the possession and 5 of their 8 shots on goal were on goal. Exequiel Palacios and Jeremie Frimpong both scored goals for Bayer Leverkusen in the first half (29′, 39′, and 41′).

Mainz 05, on the other hand, had 18 shots total, with 3 of them finding the back of the net. In five of the last six games in which Bayer Leverkusen played, three or more goals per game were scored. In this span,

Freiburg will enter the match fresh off a 1-0 Bundesliga 1 victory against VfL Bochum in their previous contest. Freiburg had 48 percent of the game’s possession and 12 of its 29 shots on goal were successful.

Vincenzo Grifo was the lone scorer for Freiburg (48′). At the opposite end, Bochum had 15 shots, five of which were on goal.

Their opponents have scored 5 goals over those games against their defenders. However, there is no guarantee that this tendency will continue. Freiburg hasn’t lost in their previous two away league games coming into this one.

Analyzing their previous head-to-head matches, which date back to 23 November 2019, reveals that Bayer Leverkusen has won three of them, Freiburg has won two, and there have been one draw.

They scored a total of 18 goals together during this time, with Leverkusen scoring 10 and Freiburg scoring 8. That equals an average of three goals scored every game.

The teams’ most recent league encounter was on Bundesliga 1 Match Day 34 on May 14, 2022, with Bayer Leverkusen defeating Freiburg 2-1.

At that point, Bayer Leverkusen had 53% of the ball and made 11 attempts at goal, four of which were successful. Exequiel Palacios (97′) and Lucas Alario (54′) both scored goals.

Freiburg had 14 shots at goal at the other end with only two being successful. Janik Haberer scored in the 88th minute.

the manager of Bayer Leverkusen, will be appreciative that he can choose from a completely injury-free squad of players going into this game with no fitness concerns whatsoever.

Christian Streich, the manager of Freiburg, does not have access to his entire roster. Names that won’t appear on the squad sheet include Lucas 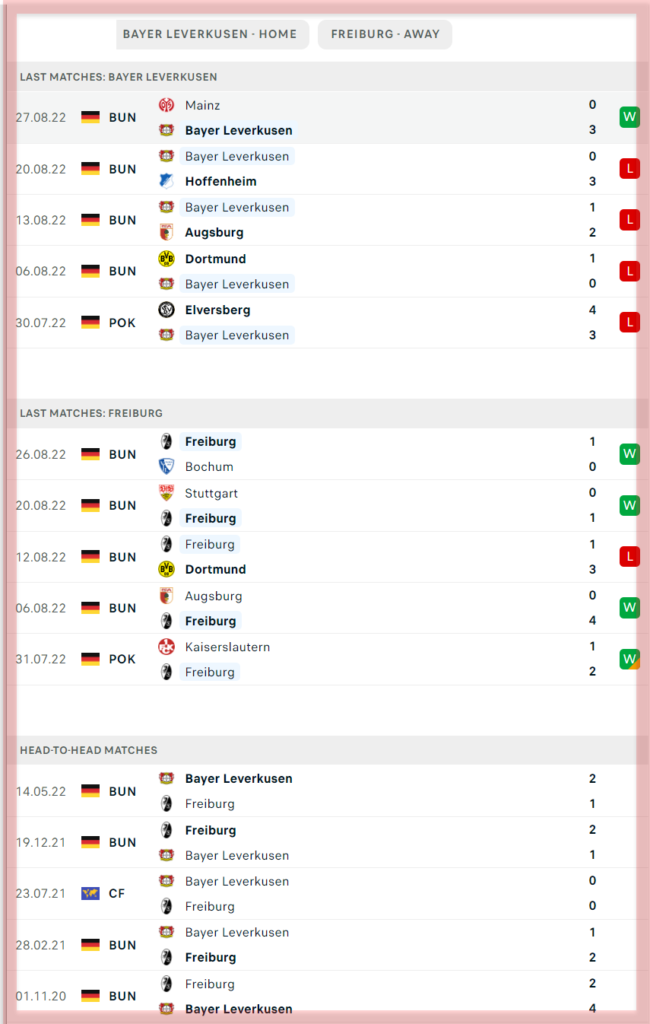