Bayer Leverkusen vs Atalanta – By providing a five-goal thriller in the first leg seven days ago in Bergamo, Atalanta and Bayer Leverkusen justified their status as one of the most intriguing matchups in the UEFA Europa League last 16.

The Italians won deservedly, as Ruslan Malinovskiy and Luis Muriel combined for all three goals in a 3-2 victory at Gewiss Stadium. As they dominated the pitch for the majority of the game, Atalanta could easily have scored a couple more goals.

La Dea, on the other hand, was unable to build on this victory in the domestic league, where they were held to a goalless draw at home to Genoa on Sunday.

Gianpiero Gasperini’s men have won just one of their last eight Serie A games, falling eight points behind fourth-placed Juventus. Can the UEFA Europa League be their more direct path to Champions League football next season?

Atalanta will fancy their chances in Leverkusen, knowing that Bayer also put in a poor performance in a 0-1 home loss to FC Cologne on Sunday.

Gerardo Seoane, the club’s head coach, is dealing with major issues after two of his first-team regulars (Florian Wirtz and Jeremie Frimpong) were injured against FC Cologne. On Thursday, their absence may be felt.

Neither team will be coming into the match on a high, but we like Atalanta’s chances of beating Leverkusen at 2.87 odds.

Bayer were outplayed in the first leg, and they did not look good in the weekend’s match against FC Cologne. We will also back the Over 2.5 goals FT pick at 1.53 odds because this matchup guarantees goals. 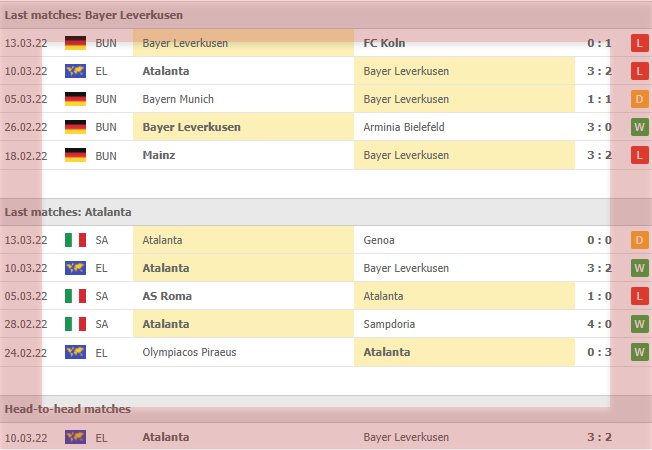