Barcelona vs Villarreal – Preview, and Prediction

Barcelona vs Villarreal – The last day’s match between Barcelona and Villarreal would ordinarily be the cherry on top of the season’s cake.

However, there should be no drama with this one because virtually everything has already been decided for these two outfits.

Villarreal does the fight for the seventh-place because they are only one point ahead of Athletic Bilbao, who has a tough match against Sevilla on Sunday.

On the other hand, we do not believe Villarreal is truly determined to compete for a place in the UEFA Europa League Conference League play-off stage next season.

El Submarino Amarillo competed in the UEFA Champions League semifinals earlier this month, and they were on the verge of eliminating Liverpool.

With a 1-2 home loss to direct rivals Real Sociedad last weekend, the club led by Unai Emery also missed out on a chance to compete in the UEFA Europa League next season.

As a result, we doubt El Submarino Amarillo will gain anything from their journey to the Catalan city, where Barcelona will be driven to win in front of their fans as the season comes to a close.

Overall, Blaugrana has had a terrible season, but we have seen some improvements in their squad under Xavi, and a win on the last day could assist to improve the overall image.

Villarreal has a poor record against Barcelona in the past. Blaugrana will be coming off four straight victories over El Submarino Amarillo. In each of the last ten encounters with Villarreal, Barcelona has scored at least two goals.

We expect Barcelona to flourish in front of their fans on the last day of the season, as there is no question that their stars will be fired up to beat the Champions League semifinalists at Camp Nou.

Barcelona vs Villarreal – Head To Head 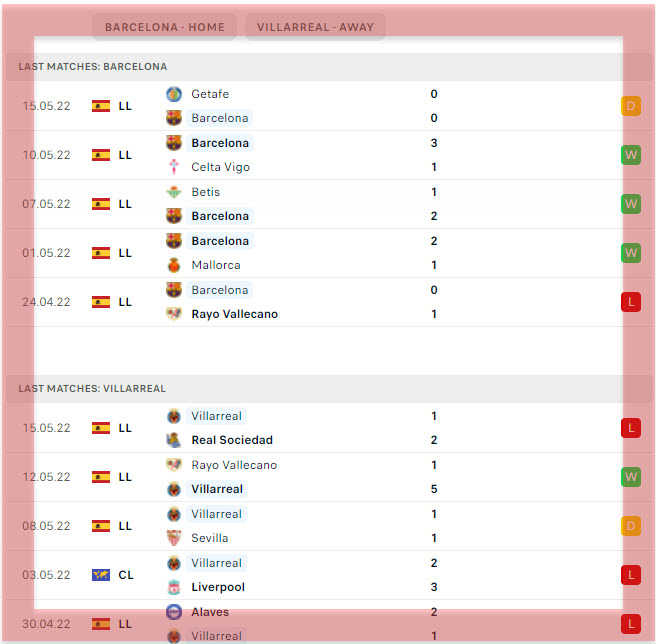