Banfield vs U. Catolica – Preview and Prediction

Banfield vs U. Catolica – After losing three games in a row, the Argentinian team needs three points to give themselves a chance of qualifying for the next round. This game against Universidad Catolica will give Banfield a great chance to make up for the loss they took in Ecuador. We think the game will be close, just like the last one, but this time, the Argentinians will win with the help of their fans.

In the last face-off, both teams had a lot of chances to score, but only the Ecuadorian team was able to do so. We think that this time, both Argentina and Ecuador will score, so the final score will be 3 or even more goals.

Because the last game had more than 30 shots, the chances of both teams scoring are very high. One reason to think that both teams will be able to score is because of this.

After finishing the group stage of the Argentine league, where the song had said goodbye to the qualification spots days before, the team is now focused on improving in the last two rounds of the continental tournament to move on to the next phase. This time, El Taladro wants to get back to winning after losing three games in a row.

Banfield vs U. Catolica – Betting Analysis

The last time Ecuador played Banfield, they won 2-0, which was a great win. In that game, they were able to do something they hadn’t been able to do in other games: they had a lot of shots on goal.

The same thing didn’t happen in their last league game in Ecuador. Even though they had 71 percent of the ball, they only got two shots on goal. Orense, the team they were playing against, only needed one clear chance to score and win all three points.

Banfield vs U. Catolica – Head To Head 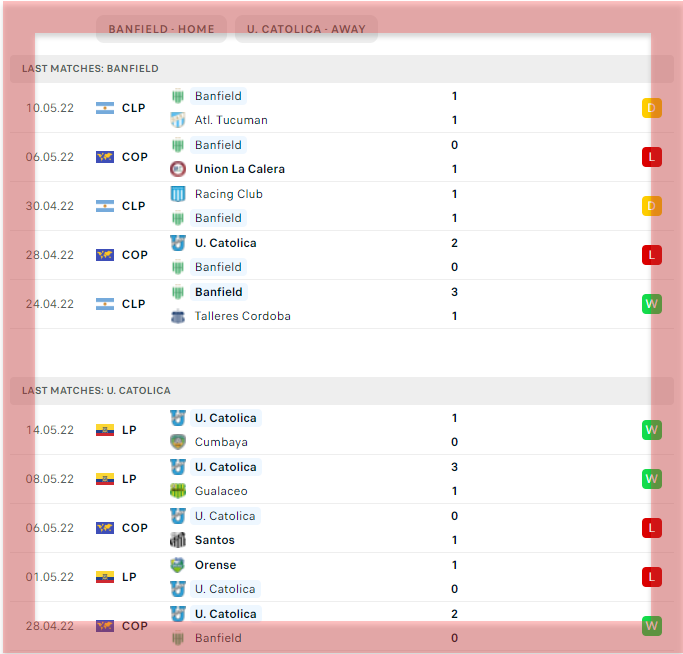