AZ Alkmaar vs SC Dnipro-1 – Game 1 Alkmaar and Dnipro are vying for the top spot in the group and advancing as group winners to the knockout stages. Currently, the former are in control of the top spot and have a two-point advantage.

Aside from one game, AZ has a perfect winning record, the most goals scored in the group, and the fewest goals allowed.

Additionally, they have a perfect home record thus far and defeated this opponent in the previous meeting. Keep in mind that it was a road victory and that it was 1-0.They hold the advantage going into this fixture now that they are at home.

Dnipro won’t make it simple, though. They already know they will finish in at least second place and have nothing to lose but everything to gain by playing this game. They are actually the only team in the group to have won the last two games, and they will try to earn all three points on Thursday.

This Thursday, as the two compete for the top spot in the table, be prepared for a furious encounter.

AZ Alkmaar defeated the opposing team 0-1 in their lone meeting. With just six games remaining this season, Alkmaar has a perfect winning record in all competitions.

They consistently scored a ton of goals and posed a threat to opposing teams, especially at home. It should be remembered, though, that they have gone 11 games without recording a clean sheet. In actuality, they last kept a clean sheet at home in August.

Dnipro, on the other hand, haven’t lost since the first week of September and are now undefeated. They’ve had a perfect winning streak up until two draws during this period. And they will be looking to continue this winning streak into their last group stage encounter.

You can probably expect a thrilling game with lots of points coming Thursday between the two teams. 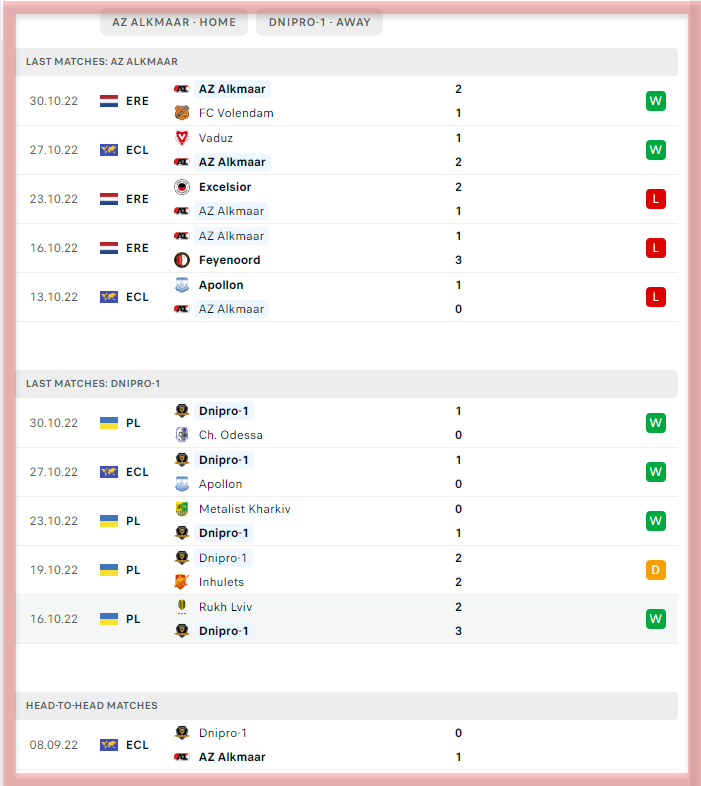