AZ Alkmaar vs Ajax – Ajax will be looking to keep their four-point lead in the standings. They will face AZ Alkmaar, who are currently in fifth place, at AFAS Stadion on Saturday  ,With 78 points from 31 games, Ajax leads the Eredivisie. They won 25 games in the league, drew three times, and lost three times. They have scored 89 goals while conceding only 15, demonstrating the strength of their defensive and attack lineups.

The visitors come into the encounter on the back of a 3-0 Eredivisie victory over FC Zwolle in their previous match. Ajax has scored 13 goals in their last six appearances.

Alkmaar, on the other hand, is in fifth place on the leaderboard with 59 points. They won 18 of the league’s 31 games, drew five times, and lost eight times. They are aiming for an automatic Conference League qualification spot, but they will have to win all of their remaining games and hope that Twente will drop points as well, which seems unlikely. In their last league match, AZ was on the verge of defeating Sparta, but the Rotterdammers struck a late equaliser to rescue a point, resulting in a 1-1 draw. They had built up a strong run of form, going two games without losing.

In the Eredivisie, Ajax has gone undefeated in 51 of their last 54 games. They haven’t lost in their last three league away games. Ajax have scored in their previous 19 games, and have scored 12 goals in their last five games alone, therefore they are likely to score today.

Meanwhile, AZ has not lost in their past two league home matches. However, in their last 11 league games, they have conceded at least one goal. However, given Ajax’s 7-game winning streak in the National Championship, we expect this away team to win. 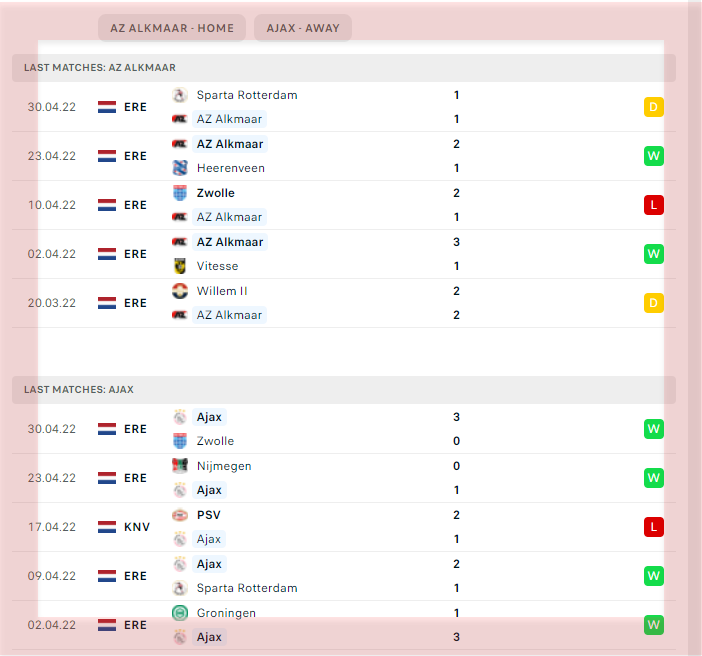