Ayacucho vs Everton- Preview and Prediction

Ayacucho vs Everton- Both Everton and Ayacucho tend to play very defensively, so it doesn’t look like there will be many chances to score in their match. But the Peruvians have shown that they are good at defense at certain points in the game.

Because of this, we think the away team will win against an Everton team that is looking more and more vulnerable.

Both teams’ offensive lines aren’t very good, which is why they use defensive schemes. In their last five games, Los Ruleteros have only scored two goals, while their opponents rarely score more than two goals.

When teams play defense, it’s hard for the Chilean team to score. Even though they are playing at home, that doesn’t mean they will score first. This season, they have lost games with no goals scored more than once.

In both the Chilean league and the Copa Sudamericana, things are getting worse for the home team. Everton missed another chance to qualify for South American tournaments in their last match in the Chilean First Division.

After failing to win in Peru’s First Division, Ayacucho will try to get another win in the continental tournament. The Peruvians moved up to second place when they beat Jorge Wilstermann and got three points.
The team led by Alejandro Apud will try hard to give their fans a win and end the round with six points and a great chance of making the playoffs.

Ayacucho vs Everton- Head To Head 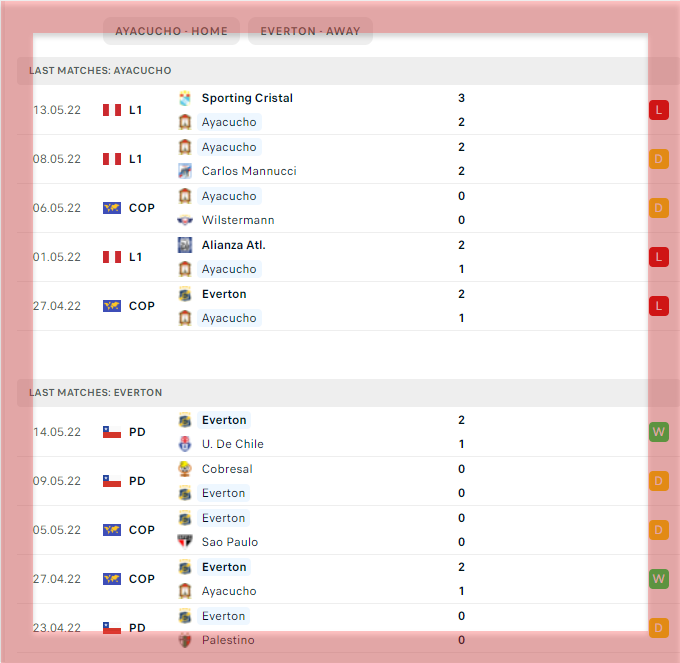