Australia vs Denmark – The Australians and Danes’ matchup is currently so close to a knockout game. These two will compete for second place since France, the defending world champions, will undoubtedly take the top spot.

With a perfect winning record, the French have broken the curse and are currently in first place in the group standings. Additionally, they would win the group if they drew their final game.

Keep in mind that they are up against struggling Tunisia as well. It’s excellent news all around for France. With three points against their name, Australia is surprisingly ranked second on the table.

And they are in a battle with Denmark, who are in third place but only have one point. The Australians might be content with a draw if the French win their match (which they will most likely do).

They will automatically qualify for the knockout stages as the Group D runners-up with just one point from this encounter. And this is where Denmark faces a challenge.

They must win this game at all costs because a loss will eliminate them from the competition. The Socceroos appear to be in a good mood. They are in excellent shape and can afford to focus a little more on defense (at least more than their counterparts).

The Danes will be urgently relying on their outstanding head-to-head record against this opponent over the years. The way things are going, this Wednesday’s game between the two teams should be a high-scoring one.

The most recent match resulted in a 1-1 draw, and in the previous 20 years, the Danes have just once failed to find the back of the net. In two of their previous four matches, they actually scored two or more goals.

They have a 100% undefeated record against this opponent since 2000, barring one loss. With the exception of their match against France, the Australians have won every game since June of 2022.

And even in that contest, they were still able to score, and they even held the lead for a while. Additionally, they are under less pressure because to their superior position at the table, which gives them the advantage.

The Danes, however, advanced to the 2020 European Championship semifinals and nearly eliminated England there. Additionally, they had excelled in their UEFA-conducted qualification matches.

They also have a strong head-to-head record versus the Socceroos, and the way things are going, goals should occur from either end of the field.

You can also rely on Kasper Dolberg to be the main attacking danger for Denmark in terms of scoring goals. Although he was unable to defeat Les Bleus in the World Cup, he was crucial in France’s elimination from the Nations League. 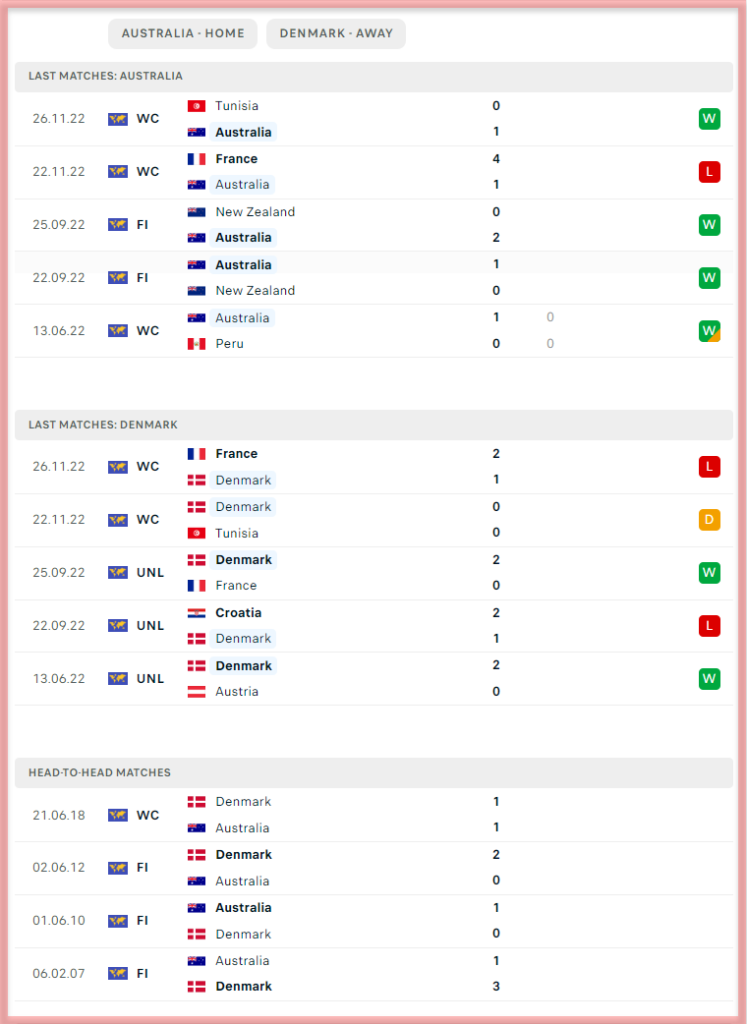