Atletico vs Sevilla – Preview and Prediction

Atletico vs Sevilla – When Atletico Madrid takes on Sevilla at Estadio Ramon on Saturday night, they will be seeking to bounce back from two consecutive defeats in La Liga.

Diego Simeone’s team, who are currently fourth in the table, have lost their past two league games against Mallorca and Real Madrid, while Sevilla, who are second, have won their last two games against Villarreal and Athletic Bilbao.

Real Madrid is threatening to run away with La Liga this season, but Julen Lopetegui’s Sevilla are the capital club’s closest challengers at the moment, with Julen Lopetegui’s side picking up 34 points from 16 games to sit in second place, five points ahead of Real Sociedad and eight points off the summit.

Los Nervionenses were eliminated from the Champions League last week after losing 1-0 to RB Salzburg in their last group encounter. They finished third in the group and were relegated to the Europa League.

Sevilla’s performance in the European Cup this season will have disappointed them, but they have won four of their past five domestic games, including Copa del Rey winners against Cordoba and Andratx.

In the league, Lopetegui’s team has won 1-0 against Villarreal and Athletic Bilbao since losing to Real Madrid, and they are five points ahead of fourth-placed Atletico ahead of this weekend’s match.

Sevilla haven’t finished higher than fourth in this league since 2009, but they could be Real Madrid’s main title contenders this season, given Atletico Madrid’s and Barcelona’s struggles.

Last weekend’s Madrid derby saw Atletico Madrid bounce back from a stunning home loss to Mallorca, but they were unable to win at the Bernabeu, as goals from Karim Benzema and Marco Asensio won all three points for Carlo Ancelotti’s side, who will be difficult to stop this season.

Unlike Sevilla, Atletico will compete in the Champions League’s last-16 round, after their 3-1 win against Porto on December 7 was enough to move them to the next round, where they will face 20-time English champions Manchester United.

Before the Christmas break, Simeone’s side has two league matches against Sevilla and Granada, and it’s critical that they stay in touch with Real Madrid. However, two terrible performances may see them slide out of the top four heading into 2022.

The incumbent Spanish champions have based much of their previous success on a strong defensive record, but they have conceded 18 goals in 16 games this season, far from the best in the division; Sevilla, on the other hand, has the best defensive record in 2021-22, conceding only 11 goals.

Four of the last six league encounters between these two clubs have ended in a draw, but Sevilla won 1-0 in the comparable fixture last season at Estadio Ramon.

Atletico vs Sevilla – Head To Head 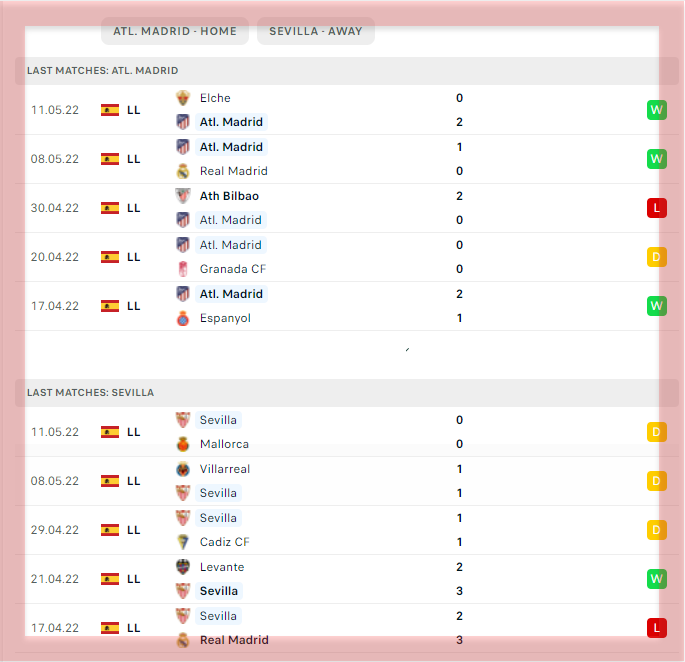